Apple’s iPad Air, launched last week, and now we have a video comparing the iPad Air vs iPad 4, which fives us a good look at the differences between the two tablets.

A well as having update hardware inside the device, the iPad Air comes with a new slimmer design, the tablet is also lighter than the iPad 4, weighing in at just one pound. 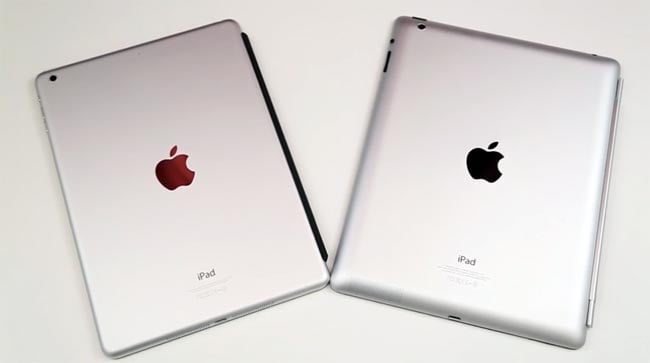 As you can see in the video there are some quite noticeable differences between the two tablets, both devices share the same 9.7 inch Retina display with a resolution of 2048 x 1536 pixels.

The new iPad Air also comes with Apple’s latest mobile processor, the Apple A7 which first launched in the iPhone 5S, it also features the new Apple M7 motion processor.

Other specifications on the iPad Air include a 1.2 megapixel FaceTime HD camera on the front for video calls and a 5 megapixel rear iSight camera for photos and video.

The iPad Air comes with a the same choice of storage sizes that the iPad 4 was available in, you can choose from 16GB, 32GB, 64GB or 128GB of built in storage.

Apple no longer sells the iPad 4, the iPad Air has now replaced the iPad 4 and it retails for $499, although they do still offer the iPad 2 which is available for $399.