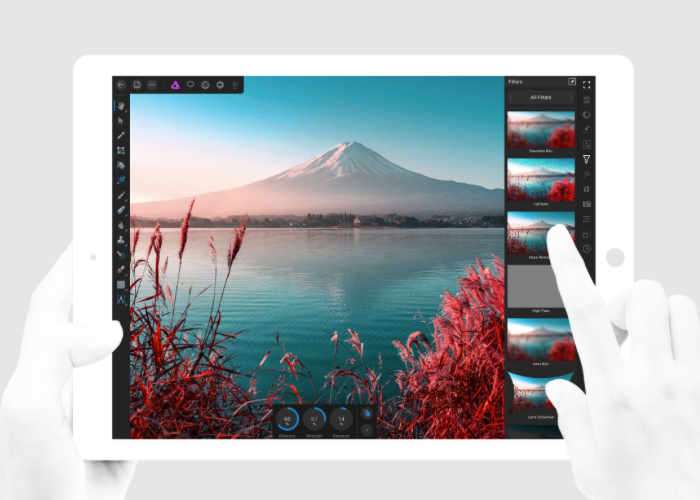 The development team at Serif has released a new update for their awesome Affinity Photo iPad app in the form of version 1.6.9 which is now available to download an update via the Apple App store. As well as the obligatory performance and ongoing enhancements released by Serif, major new updates on the latest release include massively-expanded support for touch gesture control, refined UI and much improved brush management, a new Export persona, allowing instant export of multiple slices and layers and more.

“Whether it’s quick corrections on the fly, perfecting your work with some delicate retouching, or losing yourself in complex art with hundreds of layers, Affinity Photo for iPad has you covered. Born to work perfectly with the latest iPad and Apple Pencil technology, its power and performance are unmatched in portable photo editing apps”

Managing Director of Affinity Photo developer Serif, Ashley Hewson, says: “Reviewers and customers told us Affinity Photo for iPad was a truly revolutionary product when we launched on-stage during Apple’s WWDC keynote last year. “For the first time it gave photographers, artists, editors and retouchers a full professional mobile workflow with all the features you’d expect, on the go.”

Check out the full release notes for version 1.6.9 below.

– Undo/Redo gesture with two/three finger tap.
– Export persona – a new workspace for exporting regions of your image as slices.
– Added drag modifiers to studio icons for colour, text, navigator and history.
– Added support for brush nozzle base texture mode.
– Added canvas rotation control via Navigator Studio.
– Added swipe gesture to swap primary and secondary colours on the Colour Studio
– Context menu now uses a long-press release gesture to invoke.
– Added two-finger hold gesture to resize a layer from its centre.
– During shape creation, a two-finger hold gesture will transform the layer.
– On the Layers Studio, with a layer selected, a two-finger tap on another layer will select all layers in between.
– On the Layers Studio, pinch inwards (either vertically or horizontally) to group selected layers. To ungroup, do the opposite and pinch out.
– With the Move Tool active, a two-finger hold gesture on a layer plus a one finger drag duplicates the selected layer.
– Easy access to merge and rasterise commands via Layer Studio icons.
– Improved brush stroke lag and small stroke response.
– Brushes remember previously used stroke settings.
– Move any custom brush to any category.
– Added support for on-screen keyboard trackpad mode.
– Added Tab key to on-screen keyboard context bar.
– Updated Persona icons.
– Numerous other improvements and fixes.