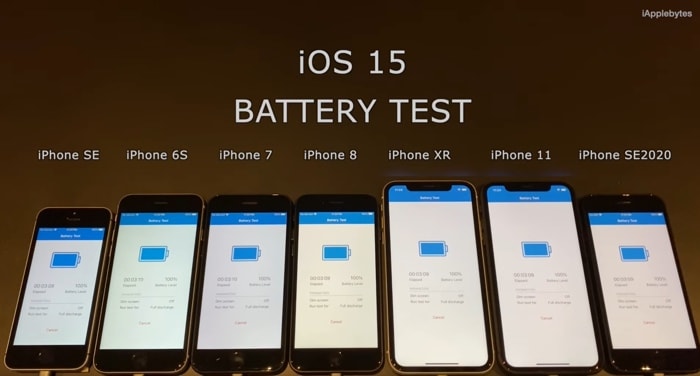 Apple’s iOS 15 software update is coming later today and now we get to find out what the battery life is like in this new version of Apple’s iOS.

The video below tests the battery life on the iOS 15 Release Candidate, this is basically the same version that Apple will be releasing later today, lets find out if there are any improvements.

As we can see from the video there were no major battery life improvements in iOS 15 over ioS 14.7, although some devices did show some minor improvements.

Apple’s iOS 15 software update is coming later today, it will bring a wide range of new features to the iPhone.

This will include the new Focus mode which is designed to help you focus on what you are doing and also cut down on less important notifications. You will be able to decide which notification are important and which are not.

Another new feature is SharePlay, this will let you watch movies and TV shows with friends over FaceTime and also listen to music. This feature is not expected to be available in today’s update, it will apparently be added in a future minor update.

The new iOS 15 and iPadOS 15 software update will be available later today, as yet there are no details on what time they will be released.