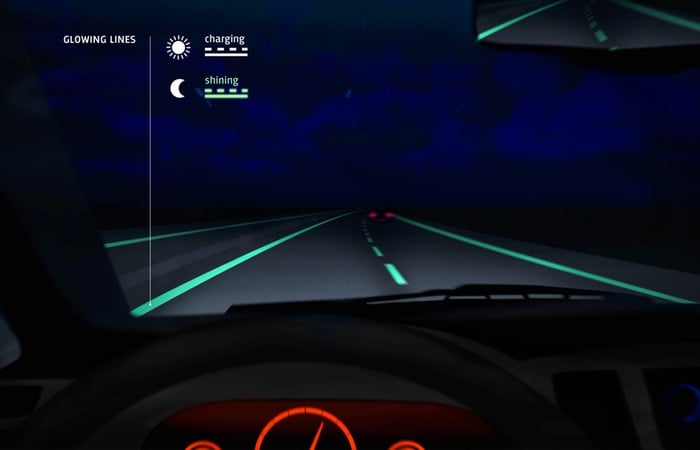 Creating a Tron style road system the very first highway glow-in-the-dark markings have now been unveiled and are under trial in the Netherlands, thanks to a test pilot scheme to see how the next generation highway markings perform.

The testing of the new highway glow in the dark markings for the Smart Highway by Daan Roosegaarde and construction company Heijmans, is now installed on part of the ‘N329- Road of the Future’ in Oss, in the Netherlands, making the project the very first light-emitting highway pilot in the world.

The new highway glow-in-the-dark lining absorbs energy during the day and then starts to glow as darkness falls for for up to periods of 10 hours, providing a safe and sustainable alternative to conventional highway lighting.

Daan Roosegaarde has won the INDEX Award 2013 thanks to his new Smart Highway. The INDEX: Award is an international, highly prestigious prize for ‘Design to Improve Life’ that is presented every two years. Watch the video below to learn more about the innovative new highway glow-in-the-dark markings that will hopefully used in other countries around the world very soon.

For more information on the new very first glow in the dark highway markings jump over to the official Smart Highway website for further details and more images.

“Studio Roosegaarde of artist and innovator Daan Roosegaarde creates interactive landscapes that intuitively respond to sound and motion. These innovative artworks are a dynamic fusion of architecture, people and technology.

Sculptures such as ‘Dune’, ‘Sustainable Dance Floor’ and ‘Intimacy’ form a ‘tactile high-tech’ environment in which the observer and the space become one. Roosegaarde calls this connection between design and content, between ideology and technology, ‘techno poetry’.

Roosegaarde’s work is internationally renowned and is exhibited in various places including in the Tate Modern Art Gallery in London, the National Museum in Tokyo, the Victoria and Albert Museum in London and in various public places in Hong Kong and Rotterdam.”