Our body is a huge reservoir for notorious pathogens that causes various diseases. 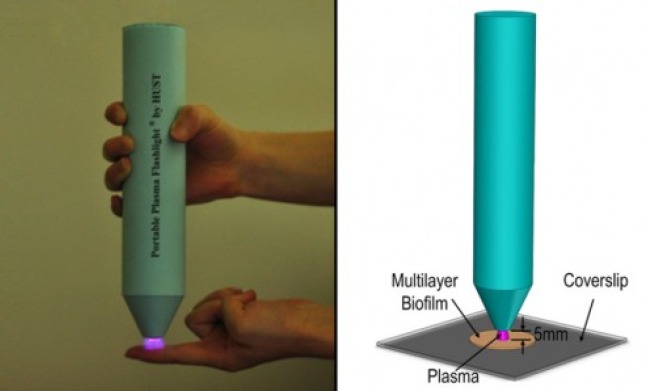 The International team of researchers from Huazhong University of Science and Technology, CSIRO Materials Science and Engineering, The University of Sydney in union with the City University of Hong Kong created a Handheld Plasma Flashlight that can kill disease-causing pathogens entirely.

In the experiment, the plasma flashlight penetrates deep into the very bottom of the layers to kill the bacteria. It effectively inactivates thick biofilms formed by pathogen, which makes them resistant against inactivation, even with the most antibiotic- and heat resistant bacteria.

The researchers ran a study to see what species were present in the plasma which enables it to kill pathogens and found highly-reactive nitrogen- and oxygen- related species. Ultraviolet radiation is also one of the reasons for success behind the device.

Although high temperatures are commonly used in destroying pathogens, however the temperature of the plume of plasma is very close to room temperature hence it can prevent any damage to the skin. The device as well has its own resistors to stop overheating and making it safe to touch.