Now this is what I call an interesting start to a new week. As you all know, Blackberry recently replaced its CEO in an attempt to steer the company in a new direction. Well, we don’t know what the company is planning, but some images have surfaced online showing a Blackberry Z10 with a new version of Blackberry OS allegedly running Google Play Store. However, there’s no confirmation from the Canadian OEM. 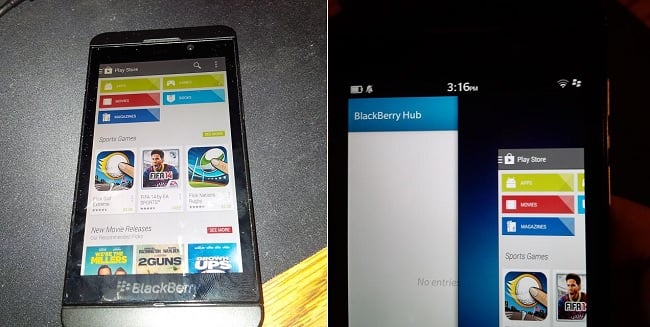 The images of Blackberry Z30 smudged with fingerprints all over its screen suggest that the upcoming Blackberry OS 10.2.1 might come with Google Play Support, allowing users to download and install Android apps and other content. The availability of the Google Play Store means users don’t have to go through the rigorous process of side-loading Android apps on their Blackberry handsets. The compatibility is rumored to arrive with Blackberry OS 10.2.1 which will be rolled out to several handsets, including the Playbook tablet as well.

The images emerged from Crackberry forums where a debate going on whether these images are real or fake. Many said these are fake while other just shot down their accusations. Well, let’s just take this rumor with a grain of salt as we’ve not seen any official announcement as of now, despite the fact that it will make a great addition to the Blackberry OS giving users access to hundreds of thousands of apps. Anyway, check out the photos below.