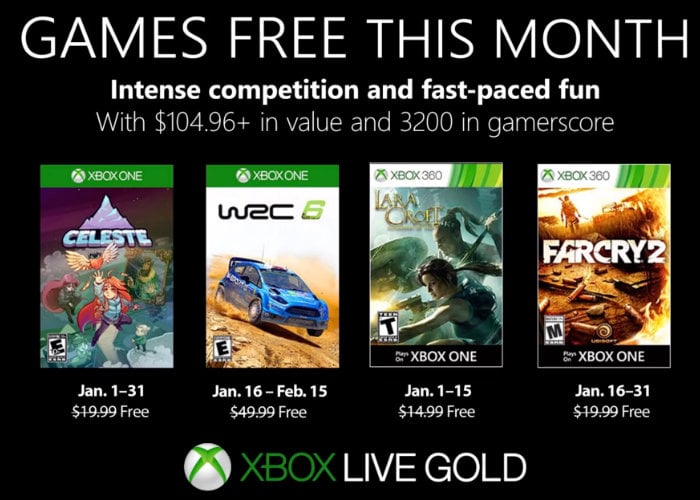 Microsoft has this week revealed details of the free Xbox games that will be made available to subscribers of its Xbox Live Gold subscription service during January 2019. January’s 2019 Games with Gold lineup for Xbox One includes Celeste and WRC 6 FIA World Rally Championship.

While Xbox 360 ownersAnd also Xbox One owners thanks to Microsoft’s backward compatibility feature will be ill to enjoy Lara Croft: Guardian of Light, followed by Far Cry 2. The selection of games on offer from Microsoft during January 2019 provides over $104 in value and up to 3200 in gamerscore.

Check out the video below to learn more about each of the four free Xbox games that will be made available next month.

“Titles are available as free downloads for qualifying Xbox Live Gold members in all markets where Xbox Live is available. Some regions may offer different titles depending on market availability. On Xbox One, Xbox Live Gold members can download Celeste ($19.99 ERP) for free during the month of January. WRC 6 FIA World Rally Championship ($49.99 ERP) will be available as a free download from January 16th to February 15th.