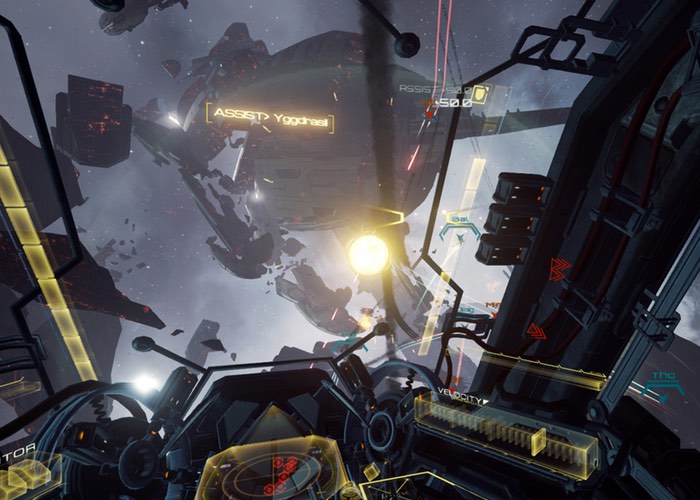 During this year’s CES 2016 technology show ShackNews was able to have a first look and experience the new Eve Valkyrie game being played on the new Oculus Rift virtual reality headset.

Check out the video below to see gameplay, and an interview with the developers of Eve Valkyrie, which will be one of two games that will be shipping with the consumer version of the Oculus Riftwhich is now available to preorder and will start shipping during March 2016.

The sole disconnect for VR users might be the use of the Xbox controller (360, in the case of this demo) to navigate the fighter. Like Lucky’s Tale before it, I had to quickly unlearn an old gaming staple: the right analog stick is not for the camera. You are the camera now. The idea here was to seek out enemy fighters and shoot them down with the right trigger or lock onto them by gazing at them and firing homing missiles. It’s an intuitive idea and one I was able to grasp quickly.

There are many more elements to EVE: Valkyrie that I wasn’t able to try out in my short time with the game. There are numerous game modes, different ship classes, and an entire progression system. This was meant as a way to introduce me to the action and it did its job of convincing me of what VR is truly capable of. It was also remarkable to see the nausea element taken down to near-zero, which CCP’s Adam Kahn attributed mostly to settling in and sitting down.

Jump over to the ShackNews website for more details on the new Eve Valkyrie and the experience you can expect to enjoy.