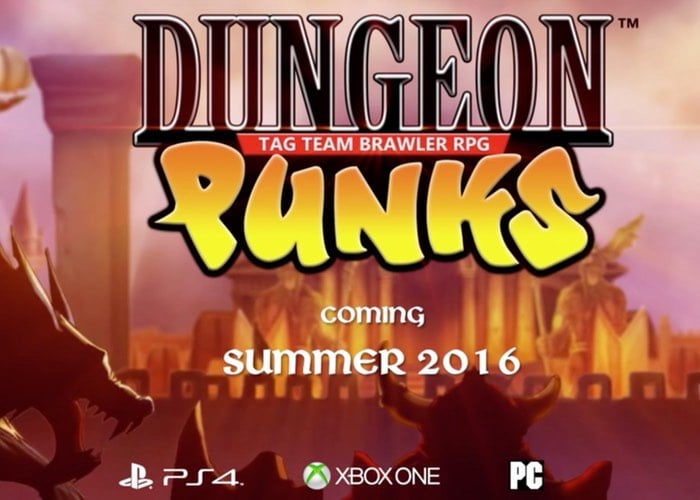 Dan Goldstein Co-founder and Developer at Hyper Awesome Entertainment has today taken to the official PlayStation blog to reveal a new teaser trailer for the upcoming PlayStation 4 Dungeon Punks game that will be launching later this year during the summer months of 2016.

The Dungeon Punks game combines some of the developers favourite ideas from brawlers, RPGs, and fighting games into one unique game which can be seen in the teaser trailer below.

Goldstein Explains more about the inspiration behind the new Dungeon Punks game which will be available to play on PlayStation 4, Xbox One and PC.

We wanted to make a game that has the interesting tactical play you can get from a great fighter, mixed with the joy of trouncing tons of bad guys with devastating magic. And we didn’t want to require crazy reflexes or hidden secret joystick moves just to pull off exciting combos.

So we did something unusual: we took some of the game mechanics from the great tag team fighters like X-Men vs. Street Fighter and shoved them into our brawler. Then we gave every character a bunch of really cool tactical magical spells and a special unique dodge move, creating a play space that’s deep, challenging, and a ton of fun.

The tag team part of Dungeon Punks is what really sets it apart. Your heroes work as a team, so you can set up a combo by turning your Tempest Knight into a giant spinning tornado attack, and then jump in as the Were-Witch and slam the same bad guys who are caught up in that whirlwind senseless. Not only that, but you can switch control to any of the up to six heroes in your party fighting alongside you at any time. Or better yet, have a buddy or two tap in and join you on your adventure!

For more information on the new Dungeon Punks game jump over to the PlayStation Blog website for details via the link below.