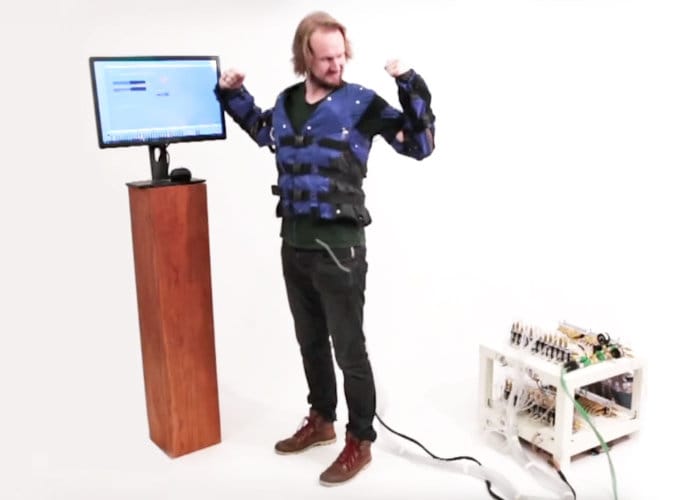 Researchers at Disney have created a new VR Force Jacket concept which enables the wearer to feel blows and shots from within the VR applications, games and experiences. Designed to provide another level of immersion for both virtual reality and augmented reality apps you can see the prototype vest in action in the video embedded below.

Until now feedback from VR body suits was provided in the form of vibrations, the Force Jacket steps this up by using an array of airbags and sensors to provide sensations over the entire upper body using force and high-frequency vibrations. Enabling users to feel touch, squeezing, punching, hugging and even the sensation of a snake moving across the body, says Disney.

“Immersive experiences seek to engage the full sensory system in ways that words, pictures, or touch alone cannot. With
respect to the haptic system, however, physical feedback has been provided primarily with handheld tactile experiences or vibration-based designs, largely ignoring both pressure receptors and the full upper-body area as conduits for expressing meaning that is consistent with sight and sound.

We extend the potential for immersion along these dimensions with the Force Jacket, a novel array of pneumatically-actuated airbags and force sensors that provide precisely directed force and high frequency vibrations to the upper body. We describe the pneumatic hardware and force control algorithms, user studies to verify perception of airbag location and pressure magnitude, and subsequent studies to define full-torso, pressure and vibration-based feel effects such as punch, hug, and more. We also discuss the use of those effects in prototype virtual reality applications.”

The Force Jacket is currently in its early stages of development but as soon is more information is made available regards a consumer version being created, we will keep you up to speed as always.