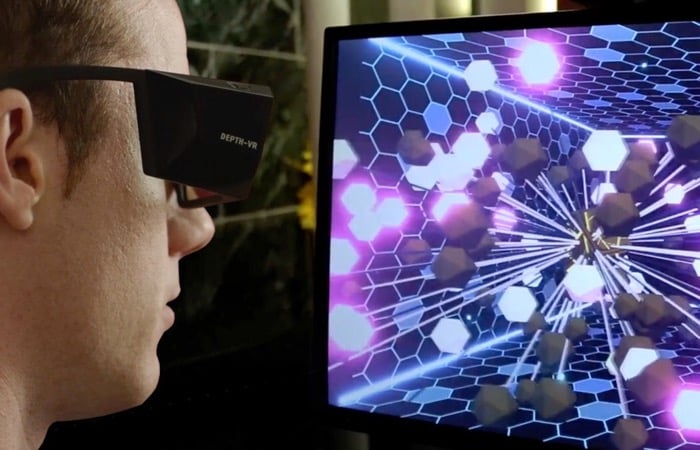 Computer users that are looking for a reasonably priced device to add realistic 3D perspective and depth to their gaming or computer viewing. Maybe interested in a new head tracking device created by the NCF Group called the Depth-VR.

Depth-VR is a pair of 3D head tracking glasses that have been specifically designed to bring “unprecedented realism” to 3D objects on your computer screen. Watch the demonstration video below to learn more.

The NCF Group explains a little more about their innovative eyewear:

“Common displays lack perspective; no matter how your point of view changes, the image is always the same, making the screen appear flat. As you move, you can see objects from all different angles, making them appear as though they are actually right there in front of you. With Depth-VR’s motion control system, you can even physically interact with these objects!

Depth-VR launches as a platform for amazing, immersive gaming. We’ve developed 15 demo games, to package with Depth-VR, with many more on the way.  We built Depth-VR to bring affordable, reliable, vivid, and above all cool 3D display effects to any screen. Before the advent of real holographic projection technology, we believe a software algorithm simulating these effects is the best way to achieve our goal.

Depth-VR uses a combination of stereoscopic 3D and head tracking, so you can feel a sense of depth as you observe 3D scenes from many angles. For ordinary screens, we use red and blue 3D to ensure your left and right eyes see different perspectives, while our polarized glasses fit perfectly with almost any 3D display on the market.”

The Depth-VR project is currently over on the Kickstarter crowd funding website looking to raise $50,000 in pledges. So if you think the Depth-VR eyewear is something your computer display viewing could benefit from, visit the Kickstarter website via the link below to make a pledge from just $60 and help Depth-VR system become a reality.