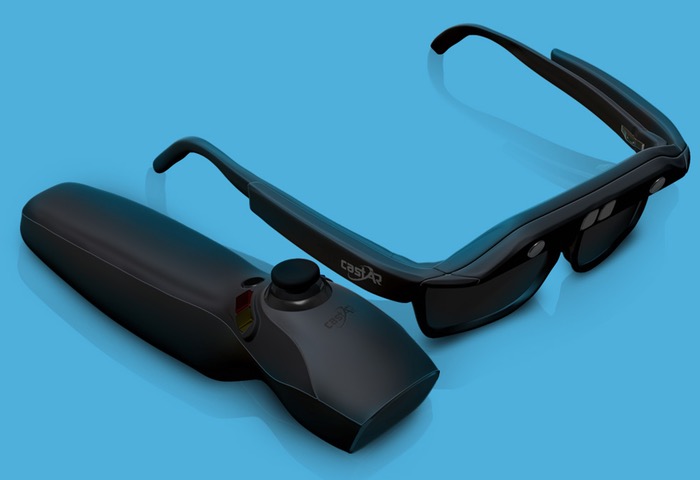 castAR the augmented and virtual reality glasses that originally launched after a successful Kickstarter campaign back in November 2013. Has this week announced the start of shipping of the first castAR glasses to Kickstarter backers.

The castAR eyewear has been designed to bridge the physical world with both augmented reality and virtual reality environments and provides the user with a 3G holographic styles projection in augmented reality providing fully immersive environments within virtual reality, say its creators Technical Illusions. Watch the video after the jump to learn more about the innovative new eyewear.

Features of the new castAR eyewear include a 1280×720 resolution with a 120 hertz refresh rate and a 65 degrees horizontal field of view. Together with a tracking camera offering a 2560×1920 resolution, 120 hertz scanning rate, magnetometer, gyroscope and 1000 Hz rate. Its creators Technical Illusions explain a little more :

These projectors cast a stereoscopic scene onto a retro-reflective surface, which in turn reflects the image back to you. Located in the center of the glasses is a highly accurate tracking camera that is used to determine your absolute head position and orientation. By attaching the optional castAR/VR Clip-Ons, you can easily turn castAR Glasses into a fully immersive Virtual Reality device.”

castAR is also now available to preorder for non-Kickctarter backers, directly from the Technical Illusions website priced at $345 which includes the castAR glasses with its built in tracking system, a magic wand, and one meter square surface. For more information on the new castAR eyewear jump over to the official Technical Illusions website for details than the ability to pre-order.