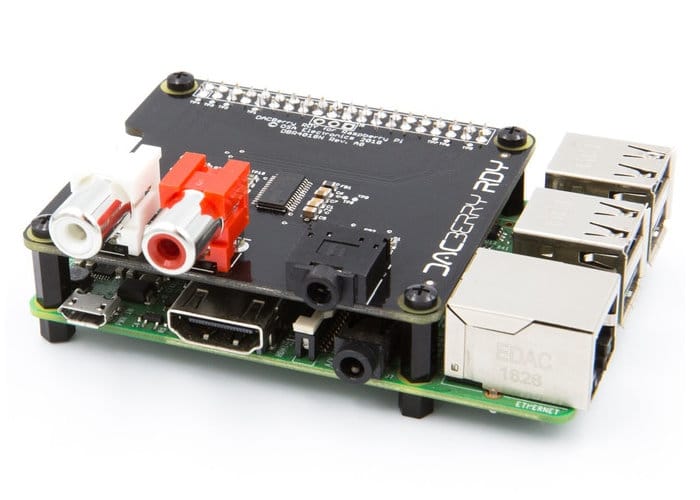 Raspberry Pi enthusiasts searching for a Raspberry Pi sound card may be interested in a new affordable high quality audio card called the DACBerry RDY designed and created by OSA Electronics based in Barcelona, Spain. The DACBerry RDY Pi soundcard uses the same DAC as DACBerry ONE, and is able to reproduce files up to 384kHz with 32bit resolution.

Other features include a new Ultra Low Noise LDO that brings a cleaner audio output, two RCA and one 3.5mm jack.The DACBerry RDY has been designed to provide a low-cost Raspberry Pi sound solution that offers an incredibly audio quality for Raspberry Pi and external power needed.

– Burr-Brown DAC PCM5142
– Up to 384kHz / 32bit resolution
– Up to 0.2W on 32 Ohm Headphones
– Directly powered from the Raspberry Pi
– IR Sensor capable for remote control
– Ultra Low Noise LDO
– Compatible with all Raspberry Pi’s with the 40-pin connector
– Compatible with other boards using I2S protocol
– Low-Noise design with isolated Digital and Analog parts
– Compatible with OSMC / RuneAudio / Volumio / Moode / OpenELEC and others.

The DACBerry RDY Raspberry Pi sound cardIs now available to back via Kickstarter with early bird pledges available from €20 for just £17 with worldwide delivery expected to take place during September 2018. For more details and all available pledges jump over to the official Kickstarter campaign page by following the link below.