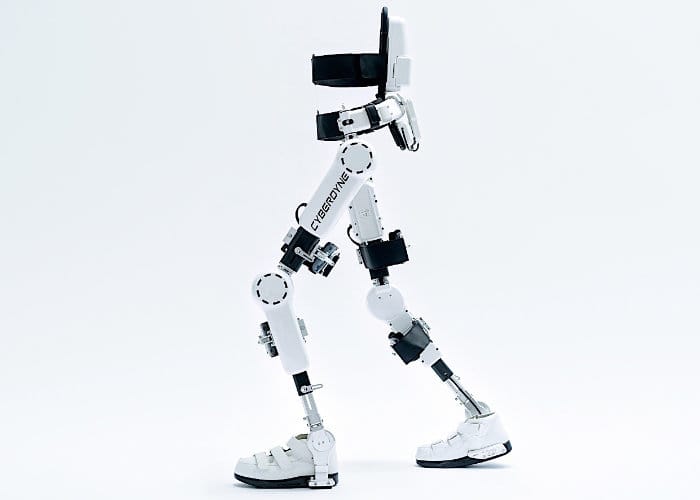 Medical hardware manufacturer Cyberdyne has this week announced the arrival of its new Cyberdyne’s therapeutic cyborg legs into the United States offering the HAL exo-suit two spinal injury patients. Watch the quick demonstration video below for an overview of what you can expect from the Cyberdyne HAL exoskeleton.

Cyberdyne has specifically designed HAL to support and fit around and injured patients legs and abdomen providing support for people who would otherwise be unable to stand or walk. Instead of using a joystick or manual controller HAL is equipped with an EEG-like sensor. The brain sensor receives no singles from the patient’s brain by touching their skin; the signals are then translated into commands which are sent to the legs of the suit.

Dr. Geneva Tonuzi, Medical Director of the Brooks Cybernic Treatment Center explains a little more about the brain sensor control. “It doesn’t have to be much, but there has to be at least that signal. If you do have enough [bioelectric signal] going through to where the surface EMGs that are put on the legs can pick up the signal, then the robot can basically do the rest. So what’s really nice about [HAL], it basically operates off what your intentions is. Maybe you’re only able to give one or two percent, and then the robot gives the remainder of the motion. But, with time, because of that sort of recovery, you’re about to get three percent, four percent, and so on, and the robot gives you less and less of that support.” For more information jump over to the official Cyberdyne website by following the link below.