As revealed in the leaked information the new Call of Duty: Black Ops 2 Vengeance DLC will include four All-new multiplayer maps, including a re-imagined Classic from the game, check out the promo trailer after the jump. 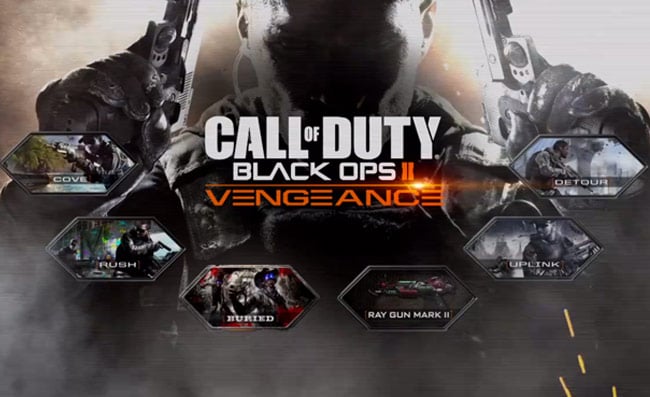 “Call of Duty: Black Ops II Vengeance delivers four new, diverse multiplayer maps starting with “Cove,” where the stage is set for all-out conflict on this small, forgotten island in the middle of the Indian Ocean, with players battling it out amongst the wreckage of a jet that crash-landed during a smuggling operation gone wrong.

Next up is “Detour,” a destroyed suspension bridge, high above an East Coast waterway, packed with scattered vehicles, exposed iron and collapsed pavement where the head-to-head action will play out on multiple levels. The third map, “Rush,” sets the stage for fast, close-quarters engagements in this paintball course turned full-combat arena, giving players new opportunities and challenges to use the cover to their advantage. Rounding out Vengeance’s multiplayer maps is “Uplink.” In this re-imagined adaptation of the fan-favorite multiplayer map “Summit” from the original Call of Duty: Black Ops, players clash deep in the rain-soaked jungles of Myanmar, high atop a hi-tech mountain facility.

Treyarch yet again expands the Zombies storyworld in new, mind-bending ways with “Buried.” Players meet up with old characters and will encounter new ones as they face off against the undead residents of an abandoned underground Old West mining town. A healthy arsenal of equipment and weapons that will be at players’ disposal, but with one very special addition – something so powerful it will also appear in all other Call of Duty: Black Ops II Zombies maps (with the purchase of Vengeance DLC): the Ray Gun Mark II.”

Call of Duty: Black Ops II Vengeance will launch first, exclusively on the Xbox 360 for 1200 Microsoft Points on July 2nd 2013 and will be followed by other platforms.