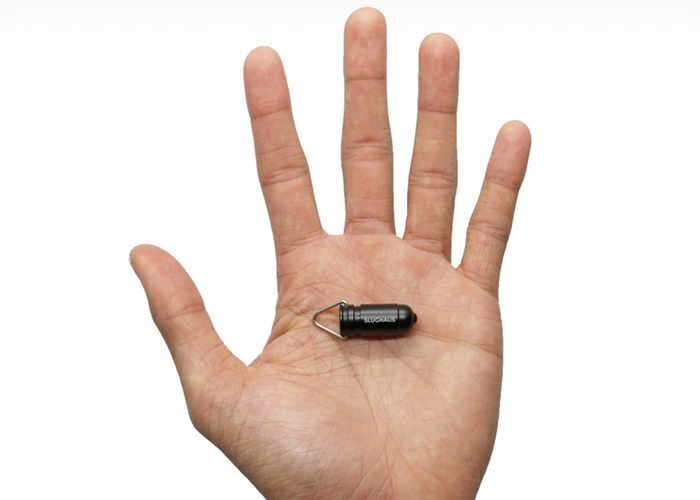 Slughaus has once again taken to Kickstarter to launch their new ultra small flashlight in the form of the BULLET 2, which is advertised as the world’s smallest flashlight, and builds on the previous version which was also funded successfully via Kickstarter.

Watch the video below to learn more about the mini multiuser LED flashlight which is available to back with pledges starting from just $10 and estimated shipping expected to start sometime in November 2017.

As you can see from the image above the tiny flashlight can be used for emergencies and easily carried on a keychain or attached to a zipper. The development team behind the BULLET flashlight explain more about their second-generation device.

Last year we introduced BULLET: World’s Smallest LED Flashlight. We are back again, now with an even more minimal design, inspired by the iconic 40 S&W Luger round.  Introducing BULLET 02: World’s Smallest LED Flashlight, Even Smaller. We wanted to create something better and solve all the issues that the first Bullet faced. So we went back to the drawing board and started a complete redesign.

The uber minimal design makes it even smaller than it’s counterpart. BULLET 02 can be attached to virtually anything. Your gym bag, your jacket, your keys. Suitable for any indoor or outdoor situation. We believe that your everyday carry essentials are a reflection of you and your lifestyle. BULLET 02 not only is functional, beautiful and minimal, but its new design makes it the best, most resistant everyday carry tiny LED flashlight available. BULLET 02 will feature a quick 180 degree rotation that is spring locked for secure on/off operation. The Bullet 02 will not unlatch even under the most vigorous conditions.

Jump over to Kickstarter to make a pledge to be one of the 1st to own the BULLET 2.0 flashlight before the end of the year.