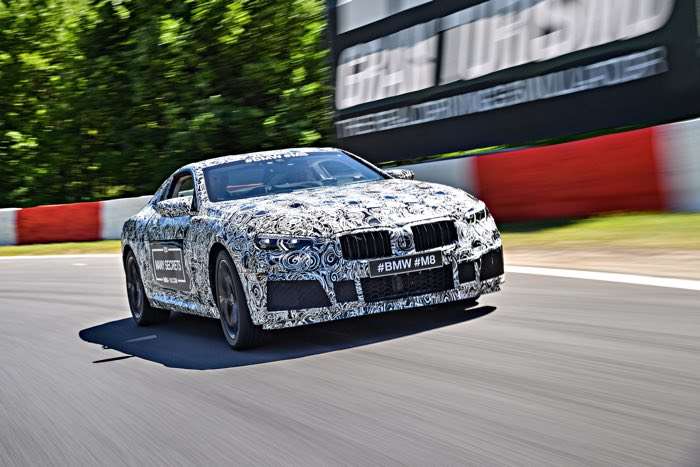 BMW recently showed off their new BMW 8 Series Concept which the 2018 production car will be based on and now they have revealed a new BMW M8 Prototype.

The BMW M8 Prototype can be seen in the picture above, although as we can see from the photo, the car if fully camouflaged.

Alongside the ongoing development of the standard 8 Series, the engineers at BMW M are also working flat out on the M model. A fully camouflaged, early prototype of the future BMW M8 will be unveiled in a driving presentation as part of the support programme for the Nürburgring 24-hour race. Classical M features like larger air intakes, modified brakes and a sports exhaust with four tailpipes hint at the significantly boosted power and dynamic potential of the car and whet the appetite for a driving experience of intense emotional richness.

“The conception and development of the standard BMW 8 Series and the M model run in parallel,” explains Frank van Meel, President BMW M Division. “The future BMW M8 will build on the genes of the 8 Series and augment its DNA with added track ability and generous extra portions of dynamic sharpness, precision and agility. It all flows into a driving experience that bears the familiar BMW M hallmarks and satisfies our customers’ most exacting requirements.”

We are looking forward to finding out more details about the new BMW M8, we suspect that this could be one of BMW’s fastest production cars to date.