The BBC iPlayer, which is a web based application that lets you watch BBC TV on your PC or Laptop has now arrived on the Apple iPhone and iPod Touch. 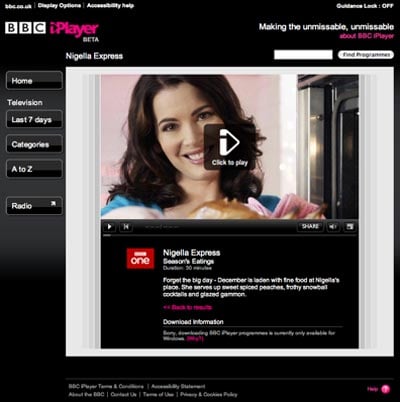 I have just been testing it out to see what the service is like, and after playing about with it for the last hour it seems pretty impressive, it works great and feels exactly the same as watching a movie stored on your iPhone, the quality is excellent.

The iPlayer won’t work over Edge, but it works perfectly over WiFi, this isn’t really a problem if you are using your iPhone in a city as it works freely over the Cloud’s WiFi hot-spots here in the UK,  which pretty much seem to be everywhere (well in my city at least).

If you don’t have an iPhone or iPod touch, don’t worry as the BBC intend to expand the service to other mobile and handheld devices.

Here’s what Anthony Rose, from the BBC had to say about how they implemented the iPlayer on the iPhone and iPod touch.

We started with iPhone because it is the device most optimised for high quality video currently available. It displays the BBC iPlayer site and BBC programmes nicely. But – go on, speculate! – we’re working on making BBCiPlayer available on many more browser-enabled devices over the coming months: stay tuned for details…

Back to BBC iPlayer on iPhone implementation: we’re not using the new Apple SDK, nor are we using the much-rumoured Flash for iPhone (no – we haven’t seen it, either). Instead, we’re creating 516Kbps streams (400Kbps H.264 video, 116Kbps AAC audio) that show off BBC programmes brilliantly on an iPhone.

They plan to roll it out next on devices which already have web browsers on them like the Nokia N95 and the Nintendo Wii.

So if you have an iPhone or iPod Touch, head on over to the BBC iPlayer website, I would be interested to know what you guys think of the service.