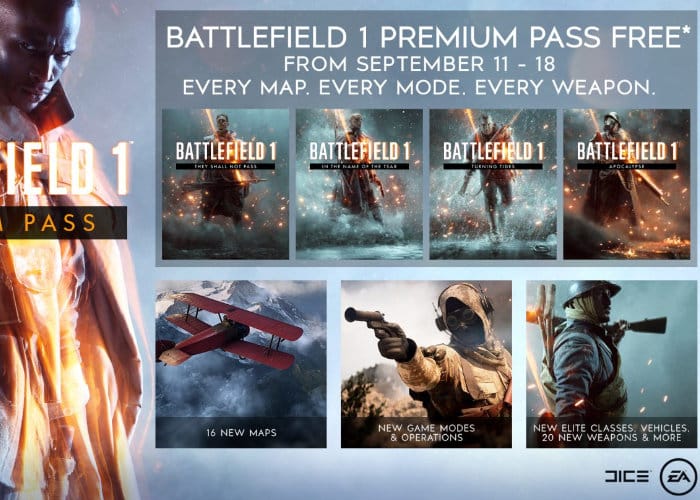 Battlefield 1 players that have not already experienced the additional DLC packs made available to those who purchased the premium pass for the Battlefield 1 game. Can take full advantage of a new special offer announced by DICE offering the Premium Pass for free between September 11th -18th, 2018.

During this time players will be able to claim a Battlefield 1 premium pass and download all the content applicable to the Battlefield 1 game for you to enjoy permanently. The significant three special offer has been created to celebrate the close of Battlefield 5’s open beta.

Battlefield 5 will be officially launching on November 20th, 2018 and will be available for the Xbox One, PlayStation 4 and PC systems.

“Enter mankind’s greatest conflict with Battlefield™ V as the series goes back to its roots with a never-before-seen portrayal of World War 2. Lead your squad to victory in all-new multiplayer experiences like the multi-map Grand Operations. Fight across the globe in the single-player War Stories campaign. Assemble your Company of customized soldiers, weapons, and vehicles – then take them on an expanding journey through Tides of War. This is the most intense, immersive, and innovative Battlefield yet. You will never be the same.”

For more details on the new Battlefield 5 game and Battlefield 1 premium pass jump over to the official EA website by following the link below.