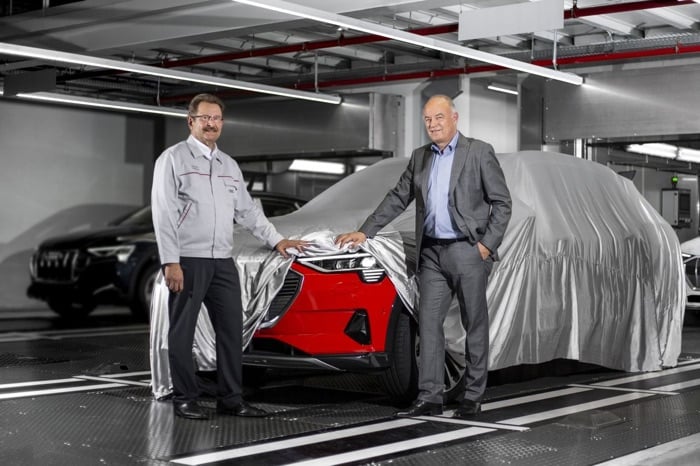 The new Audi E-Tron will be made official later this month, we have seen this new electric car in full camouflage and Audi has now started production of the car.

Audi previously told us that this new EV would come with a range of 400KM and that it would have a power output of 300 kW which is around 400 horsepower. The production version of the car can be seen in the picture above, although it is covered up so we only get to see a small part of it.

Catalunya Red and ready for the road: Audi Board of Management Member for Production, Peter Kössler, and Patrick Danau, Managing Director of Audi Brussels, could not resist watching the first Audi e-tron models driving silently off the assembly. “The Audi e-tron is a genuine pioneer,” stated Peter Kössler, Member of the Board of Management for Production and Logistics at AUDI AG. “It features innovative technologies such as virtual exterior mirrors and combines traditional Audi qualities in handling and dynamics with technical Vorsprung that goes far beyond the car. Our Brussels plant was comprehensively modernized for the production of the electric car. This is the world’s first certified CO2-neutral mass production in the premium segment.” Audi Brussels offsets all emissions produced in production and at the site, primarily by using energy from renewable sources, but also through environmental projects.

Audio will make their new Audi E-Tron official at a press event on the 17th of September, in San Francisco, we will have more details about the car then.