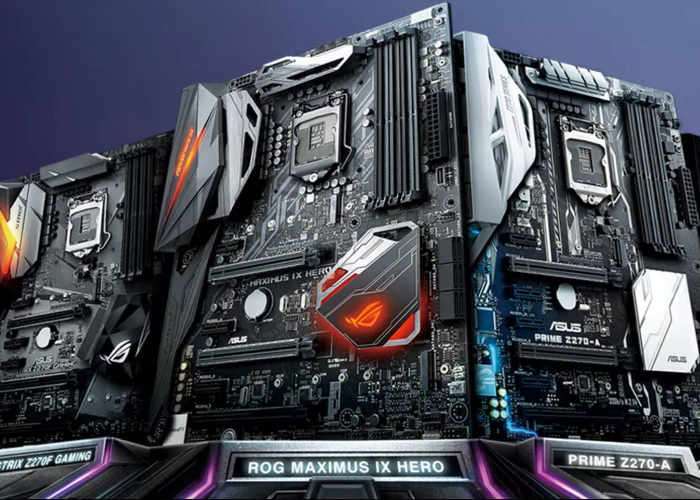 ASUS has today unveiled its complete 2017 range of Z270 motherboards which have been specifically created to maximise the potential of 7th Generation Intel Core processors says ASUS.

the new range of motherboards includes the highly anticipated next generation Republic of Gamers (ROG) Maximus IX gaming motherboards with Maximus IX Apex. Which has already won 8 world records and 13 global first places in some of the world’s toughest benchmarks.

Also included in the lineup are the latest ROG Strix gaming motherboards for style-conscious enthusiast, the all-new ASUS Prime series for everyday customization and tuning, and the latest ASUS TUF boards with 24/7 stability and newly-added overclocking abilities. The ASUS workstation motherboard series has also been updated for the Z270 revolution – and all boards are loaded with exclusive technologies to enable users to extract every ounce of performance from Intel’s latest CPUs.

ASUS Aura Sync is the world’s first motherboard-RGB-synchronization technology, delivering distinctive light shows across Aura Sync-capable motherboards, graphics cards and peripherals for up to nine effects – all controlled via the simple and intuitive Aura app. The all-new Music mode is also able to pulse synchronized LEDs in time to the user’s favorite tunes. Users are able enhance their illumination still further, either via the integrated 4-pin/12V Aura RGB header or the included extension cable. Aura offers a brilliant spectrum of colors, and can even change shades to reflect the CPU temperature, providing valuable information at a glance.

ASUS-exclusive 5-Way Optimization dynamically optimizes essential aspects of the system based on real-time use, including the all-new Stress Test Distribution feature that allows users to adjust the proportion of CPU and DRAM stress for the best overclocking performance. As well, the latest-generation Fan Xpert 4 allows users to monitor the GPU temperature to ensure cooler usage scenarios when the graphics card is under heavy loads, such as during 3D content creation or when gaming.

ASUS Pro Clock technology has a dedicated base-clock (BCLK) generator designed for 7th Generation Intel processors, enabling overclocked base-clock frequencies of up to 425MHz and beyond. It works in tandem with the ASUS TurboV Processing Unit (TPU) to enhance voltage and base-clock overclocking control, and boosts performance up to 5.4GHz and beyond.

Third-generation ASUS T-Topology takes DDR4 memory overclocking to new heights – up to 4133MHz or even beyond[2]. Refined manufacturing ensures ultra-consistent quality and minimal crosstalk between custom trace paths, so users can enjoy the thrill of overclocking DDR4 with time-aligned signaling for superior stability. And ASUS motherboards are tested for compatibility with industry-leading 790+[3] DDR4 memory modules – for great flexibility and reassurance.

Our previous generations have been validated and most awarded by many respected media outlets, proving that ASUS is the number-one motherboard brand. We strive to offer Best-selling, Easy-to-use, Stable and Trusted motherboards – that’s why we call them BEST. For our Z270 generation, we’ve taken innovation and customization to the max, with personalization features such as Aura Sync RGB lighting and support for 3D-printed components. We’ve also co-operated with Shapeways to launch a dedicated ASUS shop where users are able to purchase, download and customize and 3D-printable accessories worldwide – so they’ll never again have to stare into a drab, unexciting computer case. It’s time to unlock the power of 7th Generation Intel Core processors – and an ASUS Z270-series motherboard is the perfect way to do just that!