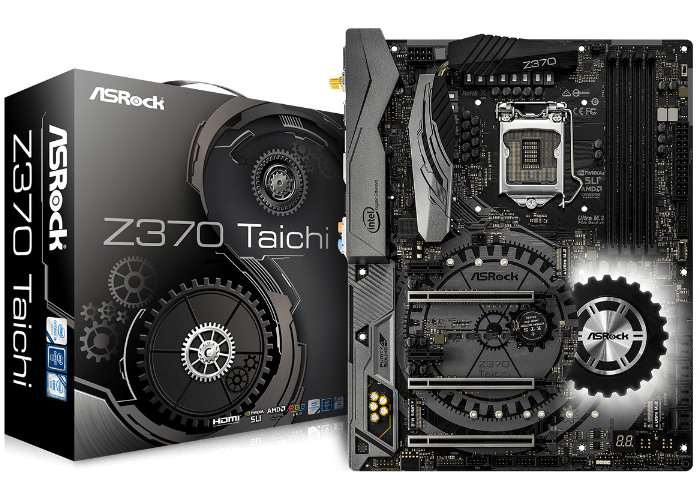 Supporting Intel 8th Generation Intel Core Processors, ASRock has upgraded its processor VRM design to accommodate more power phases than ever before now offering up to twelve. As well as including a Hyper DDR4 design to provide outstanding memory overclocking ability and support up to an DDR4 4333 MHz RAM.

Supporting the latest peripherals, accessories and mobile devices, ASRock’s high-end motherboards – such as the Fatal1ty Z370 Professional Gaming i7 and Taichi – provide a USB 3.1 Gen2 Type-C header to ensure the most powerful and versatile USB connection can be easily accessible at the front of the PC case. And not only that, the flagship Fatal1ty Z370 Professional Gaming i7 accelerates gaming, SOHO and home office usage, by providing the latest AQUANTIA AQtion 10Gb/s super-fast Ethernet on board.

The perfect mid-range fighter – ASRock’s Killer SLI series motherboard has always been the best choice for budget multi GPU setups. And now the Z370 Killer SLI continues that tradition by offering the best CPU power solution in its class, with 10 phase power, as well as a USB3.1 Gen1 Type-C front header, and 2x Ultra M.2 to provide super-fast PCIe Gen3 x4 speed for SSDs, also with the cool new design, the black and gray PCB artwork gives the motherboard a striking but classy feel.

Of course, while high-end users get all the attention, every user wants performance and stability. In fact, ASRock has always been the perfect solution for mainstream users, and continues to offer these users a great blend of computing performance, graphics power and amazing stability, even bringing 10 phase power design to the Z370 Pro4 and Z370M Pro4 series motherboards, which represents the best power solution available from any of the companies competing in this market.

ASRock’s Z370 series: the best across the board – With this new line up of ten unique Z370 series motherboards, ASRock is now able to offer the best solution across the board for all of the 8th Generation Intel Core Processors. In fact, with this new motherboard series, ASRock is today redefining how a stable and powerful motherboard should be built. ASRock’s Z370 motherboards are available in ATX, mATX and mITX platforms, with boards for users from the mainstream up to high end gamers and enthusiasts.

Visit the official product range page via the link below for more details.