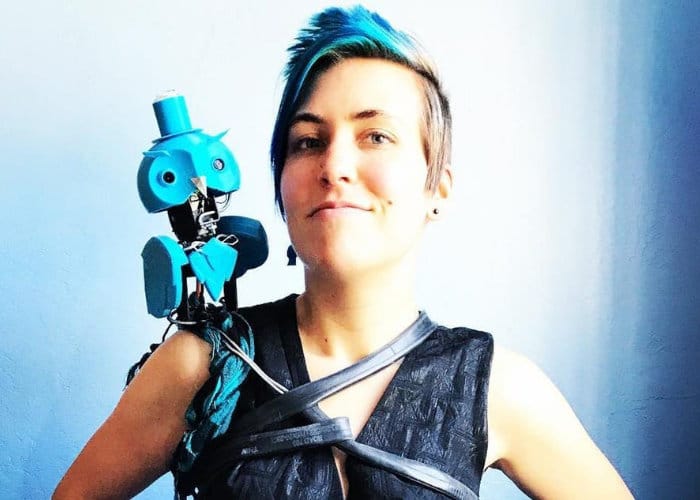 Alex explains more about the inspiration behind the project and its construction, “This is a robotic owl that looks around for cool people, and can tell whether you’re happy or upset. If you’re excited enough, he will eventually let you take a sticker (or other small giveaway). He’s named Archimedes, after Merlin’s familiar in TheOnceandFutureKing. Of course, it’s also reminiscent of the cyborg owl in Blade Runner.

First up, if you don’t know the Google AIY Vision Kit, check out the details here! This is the basis for the robot’s smarts. The code for this project is coming soon. It started when we were invited to contribute something to the Google booth at Bay Area Maker Faire. I took a really, really long time to figure out what to build—what it would look like, how it would animate, how it would dispense the stickers… in the end, I went with this cute and fairly challenging design.

This robot is versatile enough that I can bring it along to different events, such as the CODAME Artobots Festival and the Arm/Hackster Asia Tour (since the Raspberry Pi runs on an Arm chip, the Broadcom BCM2835). In other words, I can justify spending this much time on one project because I can re-use and iterate upon it. I’m also excited to have a sidekick in the office :)”

For more information and full instructions on the complete project jump over to the official Hackster.io website by following the link below.