There are two alleged devices which came under the spotlight of the rumor mill: Samsung Galaxy S5 and the HTC M8. Talking about the HTC M8, the handset has leaked extensively in the past few days, and rumors suggest it will be called “The All New One.”

Yesterday, @evleaks posted a press render of the alleged HTC M8, and now he’s back with some more. Recently, he tweeted out another press render, showing the handset in gray color. 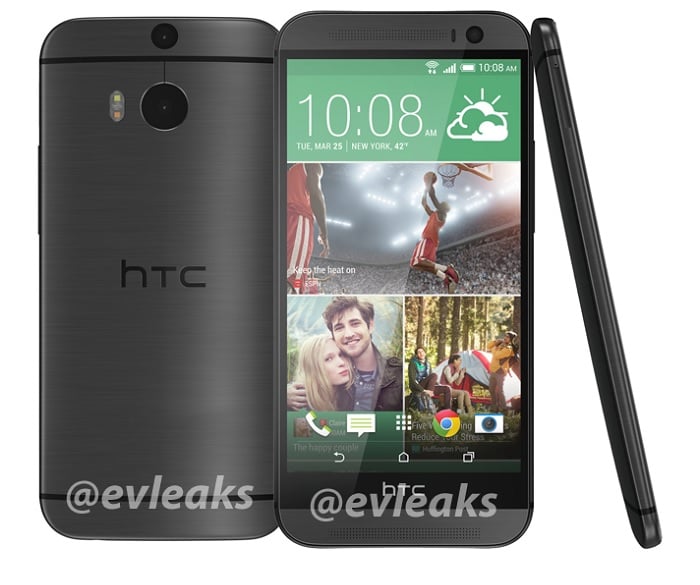 The render goes with all the leaks we’ve seen before, and shows dual-camera sensors on the back of the device with a dual-LED flash as well. As @evleaks said before, the handset looks “strikingly similar” to its predecessor.

Based on rumors, the handset will rock a 5-inch display sporting a resolution of 1920 x 1080 pixels and is expected to ship with Snapdragon 800 SoC and 2GB of RAM on board.

On the rear, it’s expected to come with dual-camera sensors for capturing photos in different lighting conditions. Other features include 16GB internal storage with a microSD card slot, on-screen navigation buttons, WiFi, Bluetooth and is expected to come with Android 4.4 KitKat with Sense 6.0 UI pre-installed out of the box.

HTC has sent out press invites for its event for its event on March 25th in New York City where the company will announce its “primary flagship for 2014.” As with past HTC events, the event will be held simultaneously in London and NYC. We’ll update you as soon as things get official.