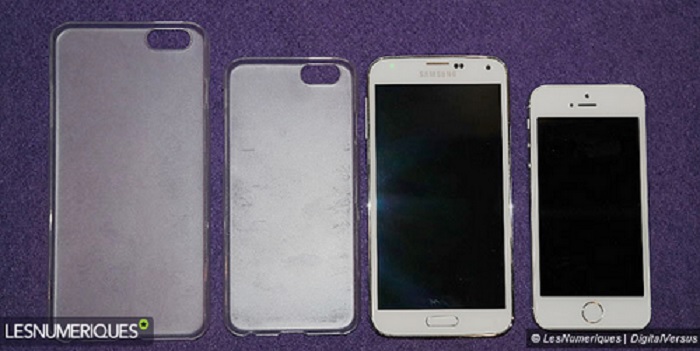 The past few weeks have been quite busy when it comes to the alleged iPhone 6. We’ve seen countless number of leaks with the purported iPhone 6 dummies, in several color options.

It’s the weekend, but that’s not a reason for the rumor mill to stop working. Now, some images of the alleged iPhone 6 cases surfaced, showing both the 5.5-inch and 4.7-inch versions. The cases are accompanied by the Samsung Galaxy S5 as well as the iPhone 5S, which should give users a pretty good idea about the screen size of the purported iPhone 6.

We’ve seen several leaked videos, and images of the iPhone 6 in the past few days, and most of them point to the same thing — large screen iPhone 6. The device is rumored to come with the latest A8 processor, and the latest iOS 8 as its operating system with health and fitness-related features. In addition, rumors also suggest it will be waterproof.

Apple is rumored to launch the 4.7-inch iPhone 6 a little earlier in August, followed by the launch of the 5.5-inch iPhone 6 in September. There are a lot of rumors floating all over the internet about the launch of the iPhone 6, some say that only the 4.7-inch version will see the daylight in September. As for the 5.5-inch, it’s rumored to be delayed until 2015 due to production issues, but there’s no official confirmation as of now.

And, there won’t be any official confirmation from Apple until the handset is official. We’ll update you if anything else comes up.