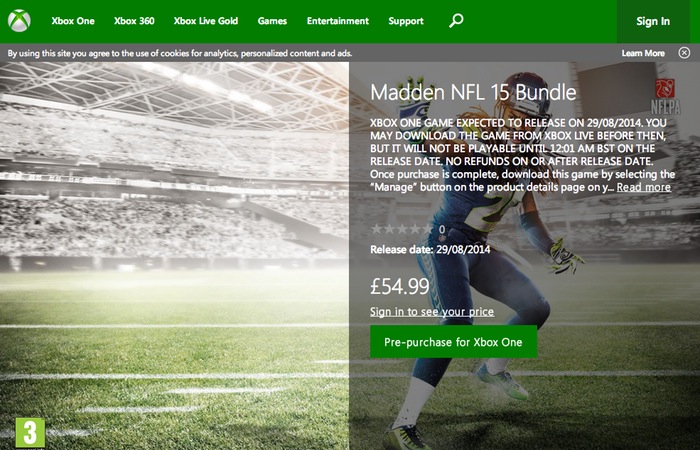 Following on from Sony that launched their new pre-loading service on their next generation PlayStation 4 back in June, Microsoft has announced that they will be starting their Xbox One pre-loading service for the launch of the new Forza Horizon 2 and FIFA 15 games next month on September 30th and 26th respectively as well as Madden NFL 15 Bundle on Sept 29th.

The Xbox One pre-loading services allow owners to download games ahead of their official release to make sure they are ready to play, as soon as possible after they have been officially launched, at one minute past midnight on the day of release.

Microsoft explains over on the Xbox Store : “Xbox One game expected to release on 29/08/2014. You may download the game from xbox live before then, but it will not be playable until 12:01 am BST on the release date. No refunds on or after release date. Once purchase is complete, download this game by selecting the “Manage” button on the product details page on your console.”

Earlier this week Microsoft also announced the availability of their new ReddX reddit Xbox One app which can now be installed and used to view reddit posts via your Xbox One console.

“You can combine your reddit experience with the biggest screen in your home: thanks to Xbox One, while you game, you can also browse the first-ever reddit app for the TV. ReddX on Xbox One can be Snapped to the side of your TV while you’re gaming or using another app to help you monitor and join in threads on the site while you’re doing anything else.”