Microsoft has today announced via a tweet that Xbox Live Gold members will receive free monthly Xbox One games during 2014. Unfortunately Microsoft has not revealed any details on which games it will be giving away for free, but it promises to release more information next year. 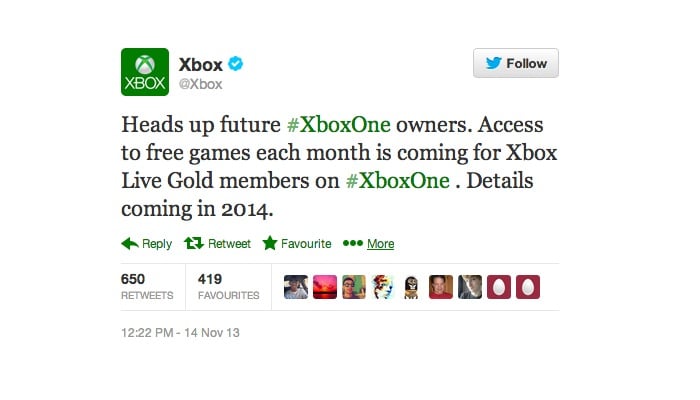 As Microsoft gears up for the official launch of its new next-generation Xbox One games console next week. It’s released a number of demonstration videos which reveal different aspects of the console and features that you will be able to enjoy. Such as being able to turn on your Xbox One using a voice command by the bundled Kinect 2.0 gesture and voice control unit.

As you might already know today sees the launch of Sony’s new next-generation and highly anticipated PlayStation 4 games console. Which will be battling it out against the new Xbox One console to see which one is victorious in the run-up to the holiday season.

Earlier today images were released comparing both next-generation consoles side-by-side and revealed for the very first time just how massive the Xbox One games console is compared to Sony’s PlayStation 4, which even has the power supply included in its case. Unfortunately the already large Xbox One console also comes with a large power brick which needs to be used and is external to the already large case.