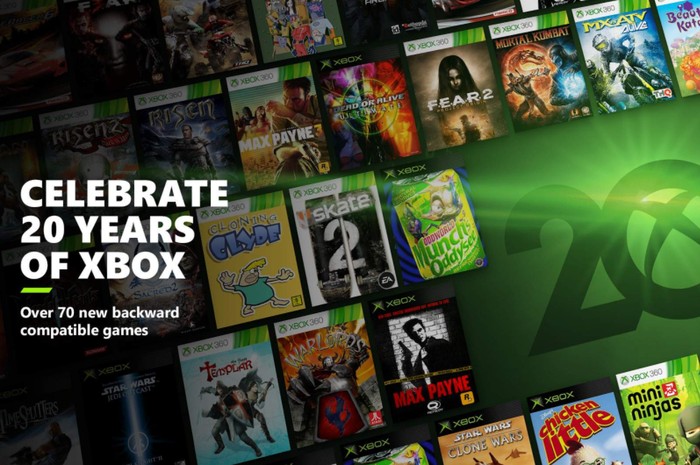 Adding to the wealth of activities taking place at Microsoft to celebrate the 20th anniversary of its Xbox games console. Microsoft has now added over 70 games for the Xbox 360 and Original Xbox to its backward compatibility library today on both Xbox One and Xbox Series X|S. Enabling you to enjoy a little retro gaming on your latest generation games consoles. The new additions to the Xbox backward compatibility library benefit from the power of Xbox Series X|S and all games support Auto HDR and many will receive a resolution enhancement, says Microsoft.

Microsoft has also enabled FPS Boost for 11 titles added today and 26 more titles from the existing library as well as started rolling out FPS Boost out to Xbox Cloud Gaming (Beta) for select titles like Fallout 76 and Fallout 4. Microsoft has made these games available to play from today if you own them on disc or digitally, and a vast majority can be purchased digitally by new players from the Microsoft Store.

“At Xbox, we believe in celebrating gaming and preserving its legacy. No other art form offers the opportunity to be immersed in expansive universes through the combination of stunning visuals, evocative music, emotion-driven storytelling and interactive, living worlds. Since 2015, the backward compatibility program for Xbox One and Xbox Series X|S has made it possible for gamers around the globe to discover and replay thousands of games spanning our 20-year history.”

“Today, we’re excited to add 70+ Xbox 360 and original Xbox games to our backward compatibility catalog in celebration of our 20th anniversary. This includes many of your top requested favorites including:

– The entire Max Payne series and the F.E.A.R. franchise are now playable on Xbox Series X|S and Xbox One consoles for the very first time.
– – The entire Skate franchise is now complete with the addition of Skate 2 and playable on both Xbox Series X|S and Xbox One consoles.
We also heard the desire for more original Xbox titles to be added to the catalog. We are pleased to announce we were able to bring more than 20+ original Xbox titles to an entire new generation of gamers, including Dead or Alive Ultimate, Star Wars: Jedi Knight II, Star Wars: Starfighter, and Otogi franchises.”