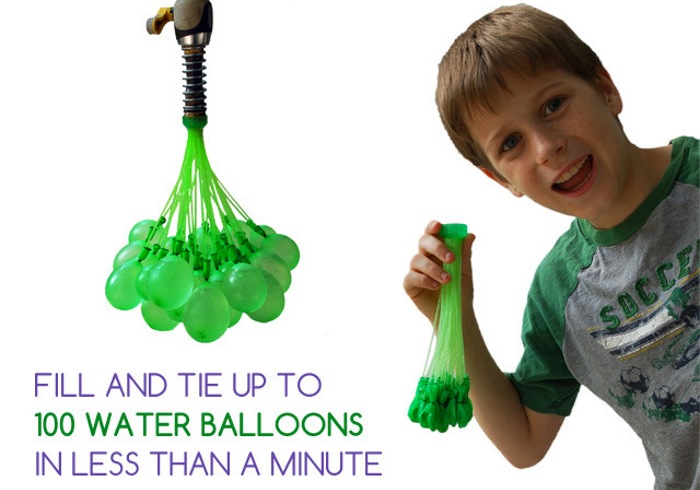 An ingenious water balloon filler that is capable of filling 100 water balloons in less than one minute has been designed and created by Tinnus Enterprises based in Texas within the US.

The new system called Bunch O Balloons was launched over on the Kickstarter crowd funding website roughly two weeks ago and has already successfully raised over $840,000 in pledges from over 20,000 backers with still 14 days left to run on the project.

So if you are looking to have an awesome water balloon fight this water balloon filler might be the perfect gadget you need to make sure you are never without ammunition. Check out the video below to learn more about the innovative Bunch O Balloons system that makes filling water balloons childsplay.

“It is time to bring your water balloon fights to the next level with Bunch O Balloons – the hose attachment with 37 pre-connected balloons that automatically fill and tie themselves! This system makes it easy for kids of all ages to prepare 100 water balloons in just ONE minute, giving you enough water balloon ammo for any battle.

Forget the trials of filling and tying countless individual balloons, Bunch O Balloons takes all the hassle of preparing for a water fight and lets you just enjoy the fun! Simply secure the pre-packaged attachment to a hose and you’ll have 100 water balloons ready to use in one minute.

Bunch O Balloons is the simplest, easiest and best solution for kids, families and organizations of all types to have legendary water balloon fights!”

So if you think Bunch O Balloons is something you could have fun using, jump over to the Kickstarter website now to make a pledge and arm yourself for the ultimate water balloon battle.