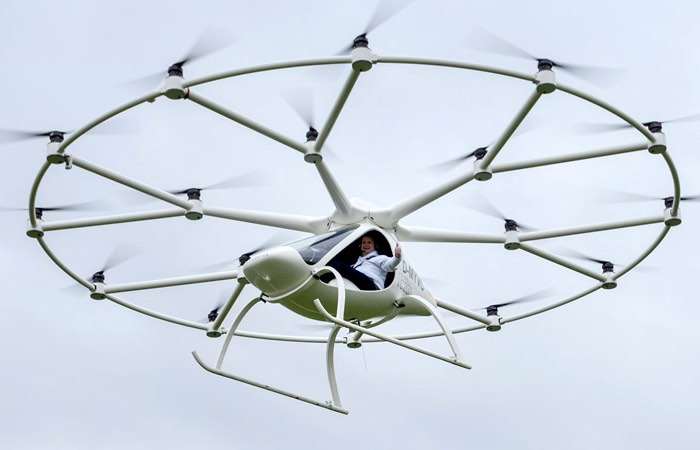 We have featured the Volocopter on the site a number of times previously. The company has now announced that they have received €25 million in funding from car maker Daimler.

This new investment should help the company stick to its plan to launch its flying air taxi. The company will be conducting demos of their new air taxi in Dubai later this year.

The objective of making flying possible for everyone has drawn closer: In July 2017 the aviation start-up Volocopter agreed a finance deal over 25 million Euros with the automobile firm Daimler from Stuttgart, the technology investor Lukasz Gadowski from Berlin and further investors. Using this fresh capital Volocopter will further expand upon the leading technology in its purely electrically driven VTOLs, (eVTOL), speed up the introduction process of the Volocopter serial model and conquer the market for flying air taxis. The safe, quiet and environmentally friendly aircraft, suitable for transporting two passengers, will revolutionize mobility in metropolises. In order to realize this vision Volocopter also invests in its team and plans to continuously develop it further.

Volocopter is up for a soaring start not just because of the successful round of funding: As early as in June the young enterprise already won top place in the international run for the world’s first pilot project involving air taxis in urban spaces. In the fourth quarter of 2017 Volocopter, together with the state transport authority „Roads and Transport Authority“ (RTA) in Dubai, will conduct initial demonstrations of an autonomous air taxi. By 2030 Dubai aims to carry out 25% of its passenger transportation with the help of autonomous means of transport.

You can find out more details about the Volocopter over at the company’s website at the link below.