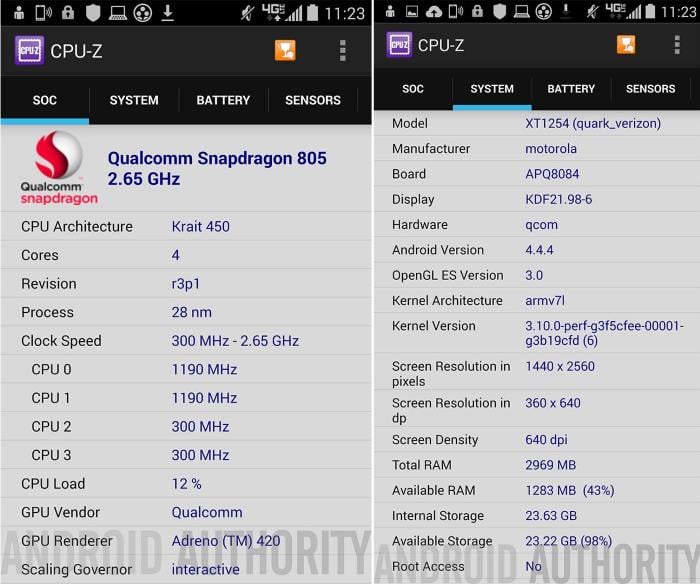 Motorola has sent out press invites for its event on September 4th where the company is expected to launch a bunch of new devices, including the Moto X+1, Moto G and the Moto 360.

However, it seems the company may have more in store for its fans. Recently, an alleged Motorola device with a model number XT1254 has leaked, revealing the specifications of the device.

The folks at Android Authority received some screenshots of the CPU-Z screen, which mentions most of the hardware details of the device. The alleged device appears to be a power house, powered by a quad-core Snapdragon 805 chipset clocked at 2.65GHz with 3GB of RAM and 32GB of internal storage on board.

The alleged device apparently sports a resolution of 2560 x 1440 pixels with a 640dpi screen density (possibly a screen size of 4.59-inch based on those numbers). On the rear, there should be a 20MP rear camera for photos and videos, with a 2MP front-facing camera.

Let’s just take this as a rumor, but there’s a reason to believe the device may be real. A device with a same model number was also spotted on Bluetooth SIG as well. Nonetheless, take it as a rumor, and wait for Motorola or Verizon to shed some light on it.

We’ll update you if any other information pops up.