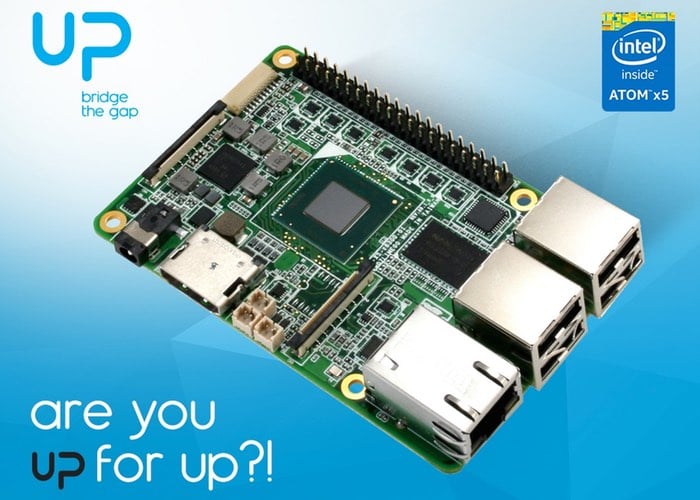 After asking themselves the question whether it is possible to have “a high performance x86 embedded board for prototypes and ready for mass production in a tiny form factor and with a reasonable price?”

The team at UP have created a new development board based on the Raspberry Pi form factor aptly named the UP, which is powered by an Intel Quad Core Atom X5-8300 1.84GHz processor. 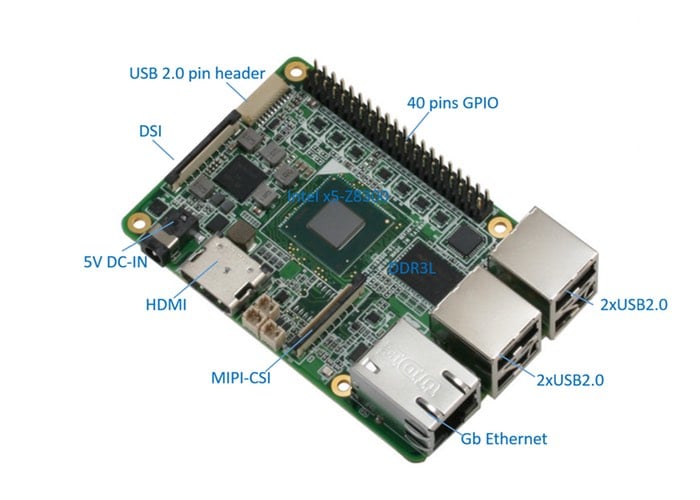 The UP Pocket PC is capable of running Microsoft’s latest Windows 10 operating system as well as Android 5.0 and Linux and comes fitted with supported by 1GB DDR3L 1600 RAM.

UP is a credit card size board which merges the benefits of Raspberry Pi2, the standard “de facto” of makers with the high performance and low power consumption of latest tablet technology : the Intel Cherry Trail Atom Quad Core x5-Z8300 64 bits up to 1.84GHz

The internal GPU is the new Intel Gen 8 HD with 12 Execution Units up to 500MHz which delivers extremely high 3D graphic performance. At the benchmark section you can find a comparison between the GPU of Atom x5-Z8300 and other platform including the Intel 4th generation of Intel Core i3. You will be astonished by the performances.

UP is equipped with 1GB DDR3L RAM and 16 GB eMMC. UP has 40 GPIO with the same connector and pin definition of Raspberry PI2 leaving the freedom to the makers to build up their shield. UP has 5 x USB 2.0, 1 x USB 3.0 OTG , 1 x Gbit Ethernet, 1 x DSI port, 1 x Camera ( MIPI ), 1 x HMDI and a RTC. UP has Intel security features needed for professional IoT applications such Intel AES New Instructions and Intel Identity Protection Technology ( https://software.intel.com/en-us/articles/intel-advanced-encryption-standard-aes-instructions-set )

The new UP mini PC is now available to back via the Kickstarter website priced at €89 and features 1 GB of RAM together with the Intel Cherry Trail Atom Quad Core x5-Z8300 processor.