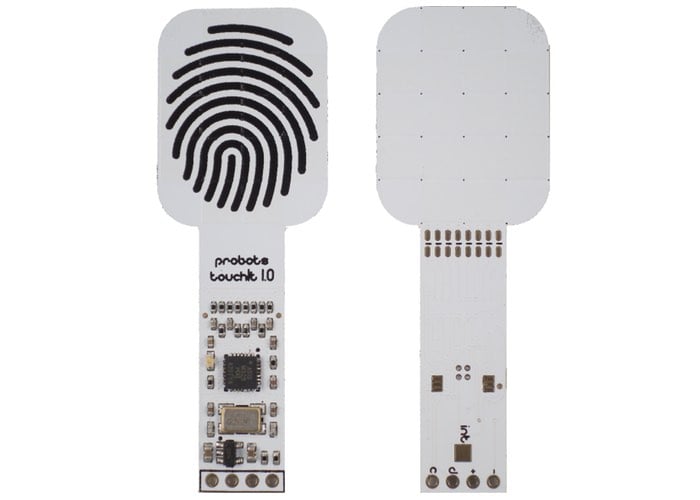 Electronic enthusiasts, makers and developers that are creating projects that require precise gesture-based input, may be interested in a new piece of hardware that has been designed by ProBots the form of the touchIt sensor.

Watch the video below to learn more about the small sensor which has a number of different modes that can be harnessed for a wide variety of different applications.

ProBots has made their new compact touch sensor available via Kickstarter with pledges for early bird backers starting from just £12. The developers of touchIt explain more about its inspiration, design and different modes.

The development for touchIt came out of a need to produce sensing elements for robotic actuators and end effectors. We needed something with the sensitivity of a skin but would also have aesthetics which added little impact on the bulk of the application it was used in.

The PCB measures 60mm x 22mm in size and the 0.4mm thick sensing element is based on capacitive technology, so it detects touches through the magnitude of charge displacement between parallel conductors. The fingerprint denotes the active side, which can be painted over if necessary. The touch detection works in multiple ways:

– Fine Mode : When commands are sent to retrieve X/Y single position data, the magnitudes of 16 active areas are interpolated to produce a reading of a user’s touch. The active area is therefore smaller but the relative position is of a higher sensitivity, at a resolution of up to 400dpi.

– Coarse Mode : When commands are sent to retrieve the touch location data, the magnitudes of the 16 active areas indicate which one is currently active, producing a lower sensitivity range but a wider detection area.

– Tap Mode : Tap detections are touches made within a short time period and return either Fine or Coarse position data as requested.

For more information on the new touchIt jump over to the Kickstarter website for details, full specifications and the ability to make a pledge by following the link below.  If you are interested in creating Internet of Things projects or require a smart home hub you might be interested in our home automation hubs and system guide.