The above is right on the greenbacks, by the way. Because unless golf courses will start sprouting up in public spaces like parks, only then can a street legal cart be of some value. Then again, when the gas runs out maybe it is a good idea to start moving around in golf carts. Besides, who rides around in a golf cart thinking they’ve got it made? Probably that guy in the promo pic below, cruising through Times Square like an entitled Master of the Universe. He won’t be smiling once he runs into the #OWS crowd, who’ll probably mistake him for a one percenter and pelt him with harsh language. 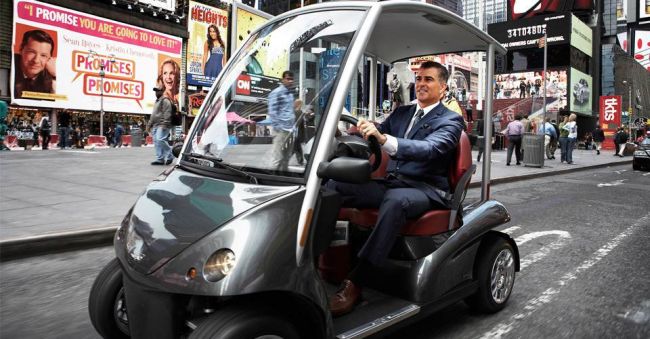 Musing on possibilities aside, the Garia LSV is an impressive vehicle. It’s an electric ride (rechargeable of course) that has a ton of neat features, from a windshield wiper to optional modifications if you’re willing to pay extra. (No wonder the guy is smiling.)

Manufactured in the same factory where Porsche’s are made, the Garia LSV costs a pile and probably won’t survive a head on collision with a tree. Uh, that last part was pretty obvious. Meaning, which cars/carts actually hit trees and survive?

For extra appeal, the Garia LSV is a USA-only vehicle though a European variant is available across the pond under a different moniker.