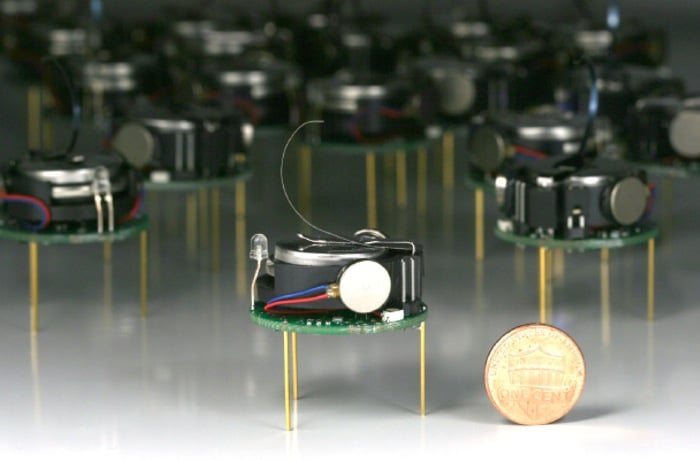 Researchers at Harvard University School of Engineering and Applied Sciences have this week unveiled a new programmable self assembly robot called the Kilobot that is capable of performing actions as one creating shapes.

The tiny autonomous Kilobot robots have been designed to arrange themselves into vast complex shapes with commands being sent to the 1024 tiny robots simultaneously using an infrared light.

The Kilobots self-assembly robots start to communicate with each other via a series of links and gradually arrange themselves into the desired shape. Each robot measures just very few centimetres across and is equipped with three pin like legs. Watch the video below to learn more about this innovative robot system.

This self organising swarm was created in the lab of Radhika Nagpal, Fred Kavli Professor of Computer Science.

“The beauty of biological systems is that they are elegantly simple—and yet, in large numbers, accomplish the seemingly impossible,” says Nagpal. “At some level you no longer even see the individuals; you just see the collective as an entity to itself.”

“Biological collectives involve enormous numbers of cooperating entities—whether you think of cells or insects or animals—that together accomplish a single task that is a magnitude beyond the scale of any individual,” says lead author Michael Rubenstein, a research associate at Harvard SEAS and the Wyss Institute.”

For more information on the new tiny Kilobot robots jump over to the Harvard University website for details.