Researchers at the Harvard School of Engineering and Applied Sciences and Wyss Institute for Biologically Inspired Engineering at Harvard University have unveiled a new autonomous construction robot called Termes they have been developing which has been inspired by the termite.

The Termes autonomous construction robots have been created to be able to build structures completely on their own and work independently to create the desired structure no matter how many robots are working on the same project. Check out the video after the jump to learn more about these Termes autonomous construction robots and how they may help build our structures in the future, both here on earth and in space. 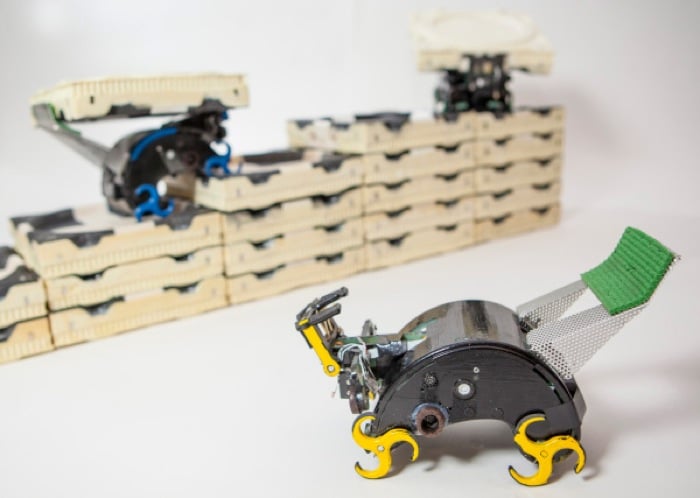 Harvard Termes Autonomous construction robots have been under development for the past 4 years and are a collective system that is capable of building complex three-dimensional structures. With the ability to actually climb on the structure and hence allow them to build much larger structures than themselves. Principal investigator Radhika Nagpal, Fred Kavli Professor of Computer Science at Harvard SEAS explains:

“The key inspiration we took from termites is the idea that you can do something really complicated as a group, without a supervisor, and secondly that you can do it without everybody discussing explicitly what’s going on, but just by modifying the environment,”

“A short overview of the TERMES project, in which we’re developing multi-robot systems for automated construction, inspired by the building activity of termites. A user can ask for a particular final structure, and independent robots with decentralized control and onboard sensing will follow simple, local rules that guarantee correct completion of that structure.”

For more information on the new Termes jump over to the Science website for details.