If you’re into science at all, you might know that the sun is currently reaching its highest period of activity in its solar cycle. During these times of peak activity, the sun creates more solar flares and throws more radiation towards the earth. Over the weekend three of the biggest solar flares in recent history occurred. 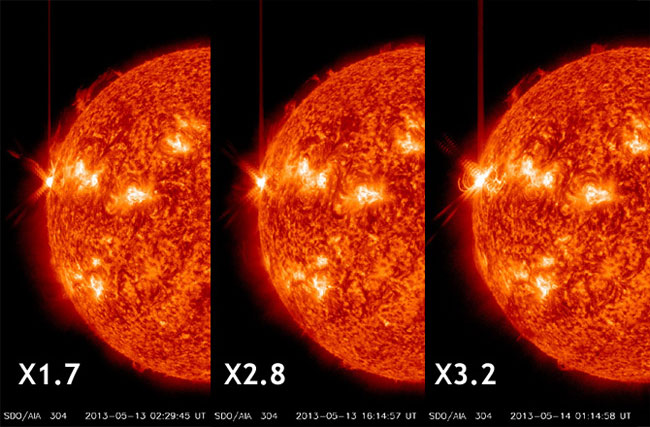 The first of the massive solar flares was an X-class flare measuring X1.7. X-class flares are the most energetic that the sun produces. While a single flare of that magnitude was impressive, the sun didn’t stop there and produced two more solar flares even larger than the first. All three the flares were produced within a 24-hour period.

The X1.7 flare erupted 9:17 PM last Sunday and was followed up by a significantly larger flare at 11:09 AM Monday morning. That second flare measured X2.8, but the sun wasn’t finished. At 8:17 PM Monday night, the sun produced another gigantic flare nearly 3 times the strength of the one from Sunday night at X3.2.

All through the flares erupted from the same region of the sun known as AR 1748. That particular region of the sun is currently undergoing intense magnetic activity. There is a high likelihood of additional high-energy flares being produced. These massive flares really don’t affect us on earth other than the radiation posing a potential of disrupting both radio and GPS signals on the ground. Our magnetosphere protects us from the harmful radiation, but astronauts in orbit aboard the ISS could be at risk from some solar radiation.