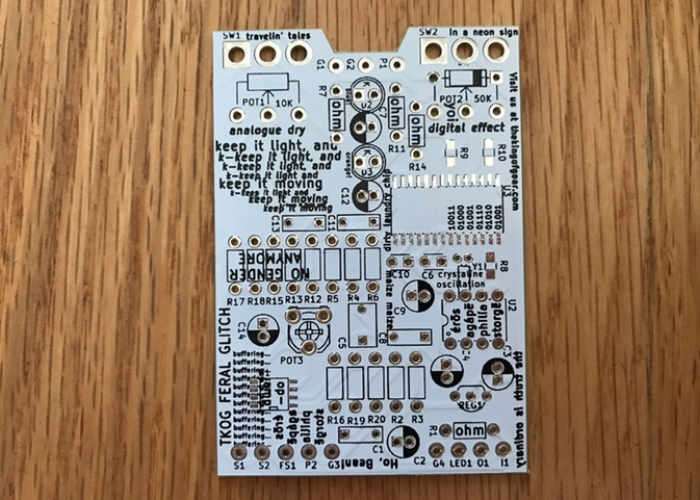 Guitarists in search of a new effects pedal may be interested in The King of Gear Feral Glitch guitar pedal which has been created by a developer and musician based in New York.

The new guitar pedal has this week launched via Kickstarter to raise the funds it requires to take the pedal introduction and provide users with a randomised stutter effect which has previously been available using software. Watch the promotional video below to learn more about the Feral Glitch guitar pedal and its features.

Features of the Feral Glitch guitar pedal include :

– “Mode” Toggle Switch: Selects between Random and Fixed Modes.
– “Dry-Kill” Toggle Switch: Selects whether dry signal is muted when stutter effect is activated.
– “Effect Time” Knob: In fixed mode, sets stutter length, from a extremely short to nearly one second. In random mode, sets maximum possible stutter length.
– “Effect Volume” Knob: Sets the volume of the stutter effect. The volume of the dry signal is fixed.
– Bypass Footswitch: True-bypass footswitch, entirely removes the effect from your signal path.
– Effect Engage Footswitch: When pedal isn’t bypassed, activates the stutter effect for as long as it is depressed. Depending on setting of the “Dry-Kill” switch, it may or may not mute your dry signal when depressed.

Most effects pedals distort, delay, pitch shift, or modulate a guitar’s tone in an entirely predictable manner. The Feral Glitch’s randomized stutter effect breaks this trend of predictability by introducing an element of chance. It takes a stutter effect – already rare in the pedal world – and randomly varies its length each time it is activated. This pedal offers not only this rare, musically random effect, but also a more conventional mode which can sync stutter effects to a particular tempo – or even as a quirky looper.

At this moment, the ‘Feral Glitch’ pedal is fully designed, tested, and ready for production. The purpose of this Kickstarter is to raise the funds necessary to fund a small run of these pedals. The run is limited to 25 units, few enough to ensure that all backers will receive their pedals in an efficient manner.

The ‘Feral Glitch’ is a stutter effect pedal designed primarily to create eclectic and aggressive glitch sounds. It sounds best when used in conjunction with overdrive or distortion, especially as the inherent compression of overdrive causes the “clicks” to sound closer to the transients of percussive sounds, resulting in particularly forceful glitching. The ‘Feral Glitch’ can also be used as a very short looper, but it shines in the creation of aggressive glitch.

For more information on the new Feral Glitch guitar pedal jump over to the Kickstarter website for details by following the link below.