We have seen the iPhone used before to make music, like the fun music produced by the guys from iBand, but we certainly haven’t seen anything on this scale before, the iPhone Orchestra.

The iPhone Orchestra is made up of students from the University of Michigan, where they are learning to design, build and play instruments on their iPhone as part of a course called ‘Building a Mobile Phone Ensemble’. 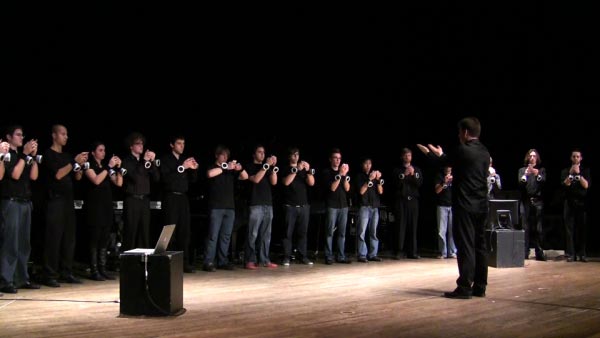 “The mobile phone is a very nice platform for exploring new forms of musical performance,” Essl said. “We’re not tethered to the physics of traditional instruments. We can do interesting, weird, unusual things.”

Each of the iPhone’s has been programmed to play a different sound, when each function is used, and the students have made modifications to the touchscreen, microphone, GPS, Compass and wireless sensor as well as the accelerometer.

The students will be performing a live concert using their iPhone’s on December the 9th, lets hope someone videos it as I suspect this will be pretty cool.