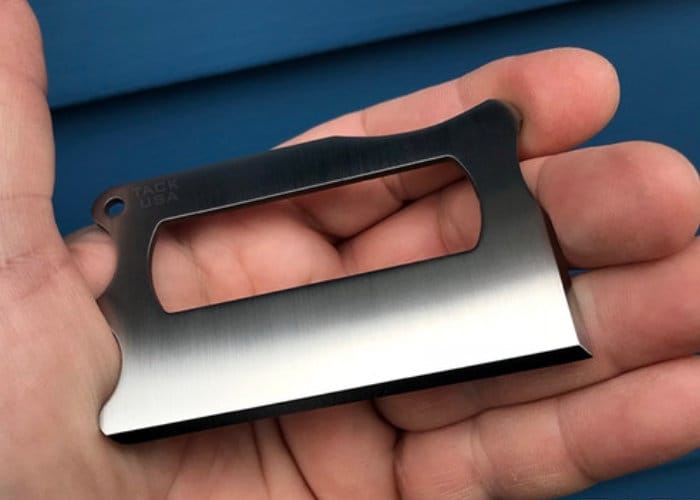 The team at TRAK have created a new carbon fibre and titanium multitool blade called the TACK, roughly the same size as your credit card allowing it to slip easily into your wallet. Making sure you always have a cutting blade capable of various functions to hand. Watch the demonstration video below to learn more about the different functions of the TACK.

Team behind TACK explain more about its credit card sized multitool which is the perfect size for your wallet.

The typical “Every Day Carry” (EDC) items for most people are made up of gear that is necessary in our daily lives.  These items include:  keys, cell phone, pen, multi-tool, wallet, money, pocket knife, medication, sundry items, and a host of many other gadgets depending on your lifestyle. Trying to carry just one more item in those skinny jeans just isn’t going to cut it. Just like a credit card, we’ve designed TACK to be carried in your wallet.  A blade which can be carried with you at all times in your back pocket or purse.

TACK is an acronym for Titanium Anywhere Card Knife which was created using our minimalist design philosophy. There’s a lot of credit card type tools out there, that just don’t “cut it”.  We knew that we could make something much better, which also happened to look good at the same time.  So we put our heads together and came up with TACK.  The end result was a tool that just simply made sense once you held it in your hand.  Our goal was to design TACK to be as thin and light as possible, without compromising structural integrity.  We wanted to make TACK practical and functional, while being suitable for every day carry.  So we made it similar in size to a credit card, which would conveniently fit in your wallet!

TACK is now available to back via Kickstarter with early bird pledges starting from just $39 and delivery expected to take place during May 2018. For full specifications and more information jump over to the official Kickstarter campaign page via the link below.