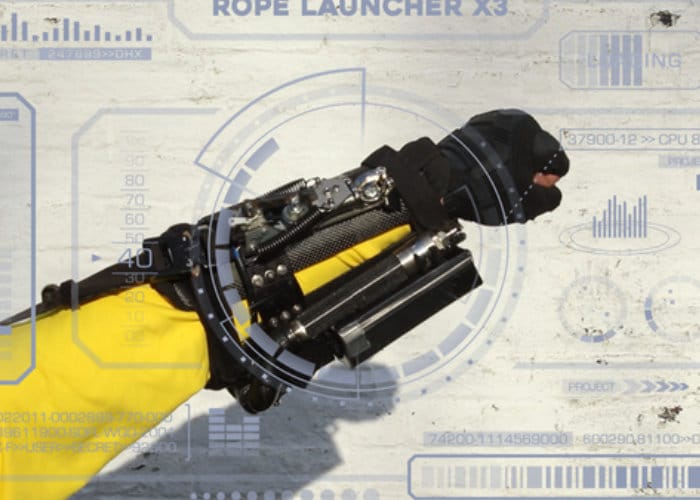 In a similar vein to that of Richard Browning the inventor and designer who created the very first jet engine flying suit inspired by the Iron Man suit created by Marvel comic hero Tony Stark.Trajan Dimsey based in the UK has created a new wearable grappling hook inspired by Spider-Man. The new Air-Ropes system attaches to both arms and allows you to fire grappling hooks to targets and then swing just like the superhero albeit in a more controlled and safer environment.

Check out the promotional video below for more details on the Air-Ropes grappling hook experience, which is looking to raise £250,000 over the next 27 days to take the experience mainstream and create a bigger test platform. The unique forearm mounted rope launches are fired at special targets and once attached allow you to swing in safety. The “travelling theme park” style experience will first visit the top ten countries that use Kickstarter United States, United Kingdom, Canada, Australia, Germany, France, Sweden, Japan, Netherlands and Singapore.

For more information on the unique experience, where backers are able to try it out themselves, jump over to the official Kickstarter campaign page by following the link below for a full list of all available pledges and more details.