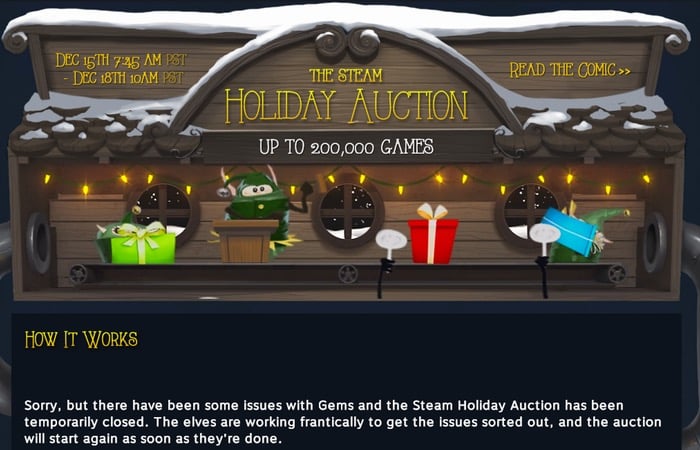 In the early hours of this morning Valve launched its very first Steam Holiday Auction making available nearly 200,000 games for the Steam Community to bid for using gems that are created by recycling Steam inventory items.

All was going well until unfortunately a glitch was discovered within the Steam gem creation system that was quickly exploited by the few Steam members who amassed a huge amount of gems very quickly. Causing Valve to close down the Steam Holiday Auction system to the disappointment of the Steam Community.

Before the Auction was closed Steam Members were able to make gems by recycling Steam community items from your inventory, such as Trading Cards, backgrounds and emoticons. The Steam Community has been expressing their concerns over on the Reddit website.

Steam members can then use the gems to create Steam Trading Card Booster packs as well as bid on the auctions, seeing the gem value of each item and a button to recycle it if desired. Gems are removed from the Steam inventory when they are used to bid, and returned to your inventory if the bid is cancelled.

For more information on the exciting new Steam Holiday Auction system jump over to the official website for details or the Reddit website to read more about the abrupt closure of the auction system. Valve has not announced whether the Auction will return at the present time.