Samsung already rolled out the Android 4.4 KitKat update for it’s flagship phablet, the Galaxy Note 3, in several regions across the globe.For those of you who are rocking Samsung’s last year flagship, the Galaxy S4, rumors suggest the Korean OEM is testing the KitKat update for the handset, but there’s no official word about the roll out at the moment.

However, if you have a Samsung Galaxy S4 tied to Sprint, your KitKat moment might arrive very soon. The folks at AndroidCentral managed to get hold of a leaked document stating Android 4.4 KitKat roll out for the Spring Galaxy S4 will commence today, February 13th. 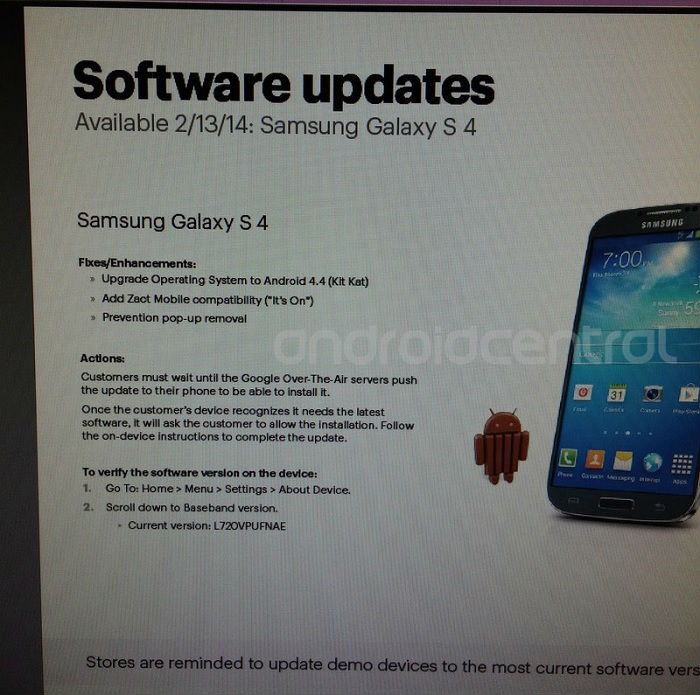 According to the leaked document, the update will bring all the goodies introduced in the Android 4.4 KitKat, including UI changes, white color status bar, along with support for Sprint Zact Mobile and prevention pop-up removal.

Although there’s no official word from Samsung or Sprint about the update, we’ll keep an eye on the news and will update you if this news is correct. In the meantime, if you’re rocking a Sprint variant of the Samsung Galaxy S4, keep an eye on the notification area or manually check for the update from the device settings during the day.

It’s not necessary that it will hit all devices the same day, but keep trying. Let’s just hope this news is correct.