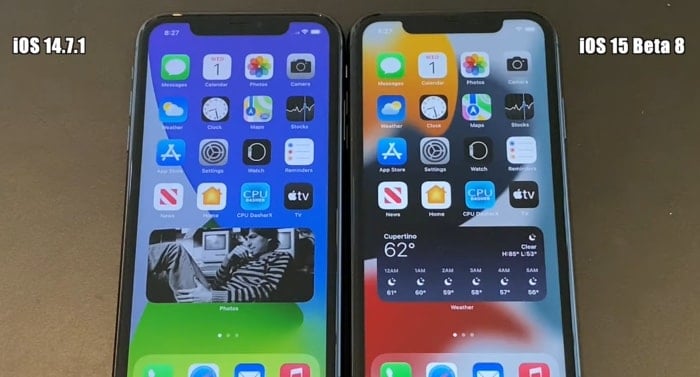 Apple recently released iOS 15 beta 8 and now we have a speed test of iOS 15 Beta 8 vs iOS 14.7.1, we get to find out if there are any speed improvements in this new beta.

In the video below the iOS 15 Beta 8 vs iOS 14.7.1 is run side by side on a range of iPhones, if you want to see a specific device to can skip to the times below.

In the first test the iPhone SE running iOS 14.7.1 was the first handset to boot up, there were no improvements in the apps speed with the new software.

The iPhone 6S running the current iOS 14.7.1 was also the first of the two handsets to boot, there were no changes in apps speeds.

In the test with the iPhone 7 the device running iOS 14.7.1 booted up first, no changes in any of the apps in the new iOS 15 software.

The iPhone 8 running iOS 14.7.1 was also the first of the two handsets to boot up, no changes in the app speeds.

In the iPhone XR test the device running the new iOS 15 software was the first of the two to boot, the apps speed were about the same.

With the final test with the iPhone 11 the device running the current iOS 14.7.1 booted up first, there were no speed improvements in the apps.

So it looks like iOS 15 will not bring any major speed improvements to the iPhone, the latest beta 8 should be pretty close to the final version of the software.

Apple are expected to released their iOS 15 software update this month along with the new iPhone 13 smartphone.