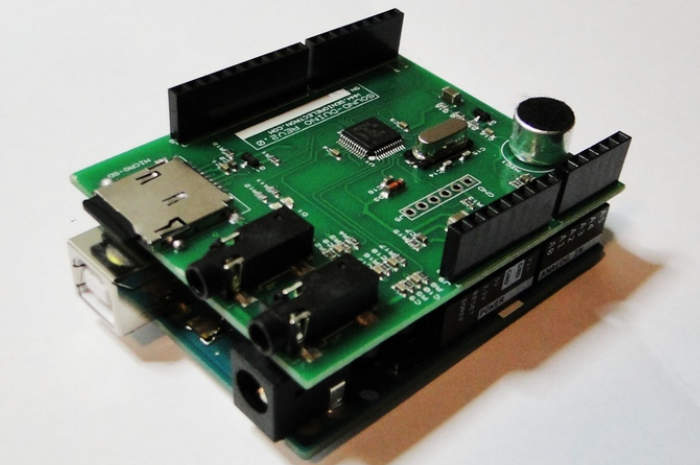 Arduino enthusiasts that are building projects that need audio support may be interested in a new Arduino audio shield which has been created by a serial Kickstarter entrepreneur Masih Vahida.

Masih is well adversed to the ways of Kickstarter and has started his 13th campaign to launch the third generation of his SoundDuino Arduino audio shield. Check out the video below to learn more about what you can expect from this new Arduino shield.

New features within the SoundDuino 3 include :

– Updated firmware, so the quality of Audio is even more ! its amazing believe me
– Baudrate detection is Automatic in this version
– Sound quality is Sterio 16 bit 48hkz (first one was Mono 8 bit 48khz)
– New functions in library to announce the numbers . very easy to use
– More useful Functions in the library
– The board has a Stereo audio output and a Mono audio input and also an on-board Microphone
– the sound quality is much much better than the last version
– you will be surprised how a small chip like that can handle that sound quality
– System voltage is 3.3v compatible with Arduino boards

For more information on the new SoundDuino 3 jump over to the Kickstarter website for details by following the link below.