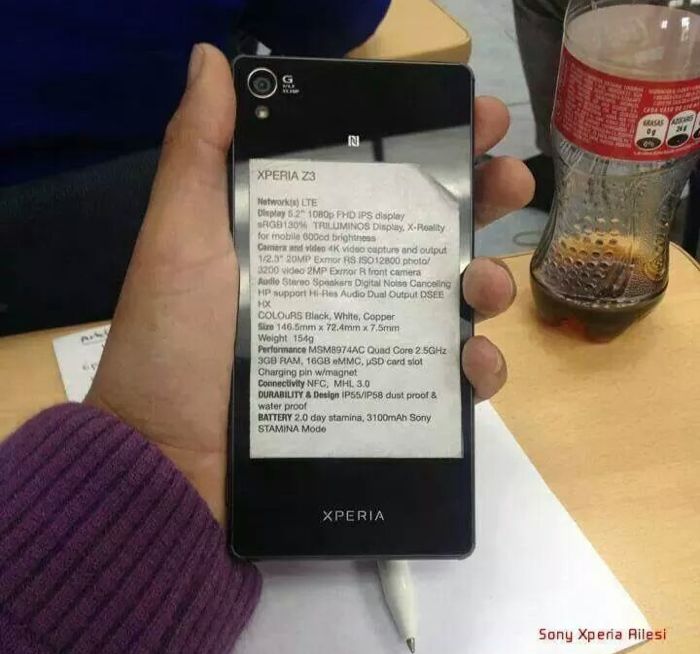 We just saw some photos of the new Xperia Z3 Compact, and now we have some more details on the Sony Xperia Z3. Another photo of a prototype Sony Xperia Z3 has been leaked, and this one come with a full specifications sheet for the handset.

If this is correct, then it looks like the rumored specifications we have been hearing about the handset are real, and it will come with a 5.2 inch full HD Triluminous IPS display with a resolution of 1920 x 1080 pixels.

The Sony Xperia Z3 will feature a quad core Qualcomm Snapdragon 801 mobile processor with a clock speed of 2.5GHz, plus 3GB of RAM and 16GB of built in storage.

The handset will also come with a microSD card slot for expansion, which will support the latest 128GB cards, and the device will come with from and rear facing cameras.

The handset will measure 146.5mm by 72.4mm by 7.5mm thick, and it will come with WiFi, Bluetooth, and NFC, it will also come with an IP55/IP58 rating for dust and water protection and will feature a 3100 mAh battery.

It looks like the new Sony Xperia Z3 will be available in three colors, black, white and copper, we will have more details when the device is made official at Sony’s IFA press conference.