As advances in robotic technology gather momentum you can expect to see more weird and wonderful robots being developed and launched, and this snake robot is just one that is being created.

One extraordinary new technology of the snake robot demonstrated recently is the dynamic head look control of a modular snake robot, which has been developed to allow the robot to always look in the same direction as it climbs tubes and structures and slithers through cracks. Watch the video after the jump to see the snake robot in action. 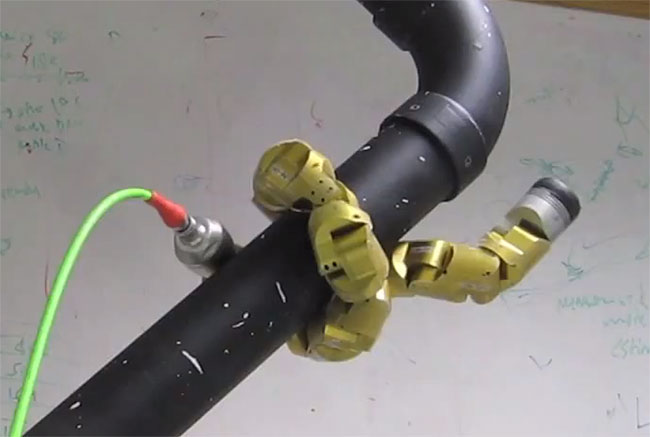 The new snake robot technology now allows users to see feedback from the snakes onboard camera from the same angle without the camera spinning upside down as the snake slithers. Perfect when the snake robot is being used in disaster zones and checking for survivors, or carrying out surveillance.

The system has been developed by CMU Biorobotics Lab who explain, a little more about the technology behind the snake robot:

“Moreover, these highly articulated devices can coordinate their internal degrees of freedom to perform a variety of locomotion capabilities that go beyond the capabilities of conventional wheeled and the recently developed legged robots. The true power of these devices is that they are versatile, achieving behaviors not limited to crawling, climbing, and swimming.”