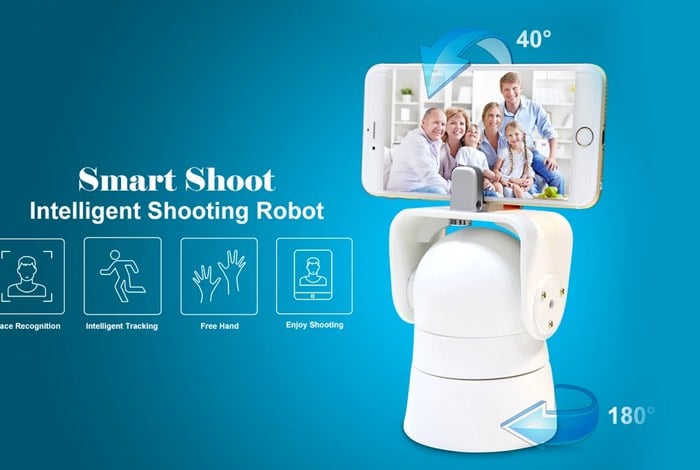 If you are looking for a way to capture video on your smartphone you might be interested in a new smartphone camera recording robot called the Smart Shoot which has been created to provide an easy way of hands-free recording without missing out on the action.

The system is equipped with both intelligent tracking and face recognition and can be used completely hands-free once your smartphone has been installed into the holder on the top.

The hardware is capable of both tilting and rotating your smartphone to always be focusing on the subject and action you would like to record. Watch the video below to learn more about this new smartphone video recording device which has taken to Kickstarter to raise $80,000 to make the jump into production. Its creators explain a little more about its design, features and functionality.

Fantastic life could be recorded and shared with family and friends by smart phone. And now, you will have a robot to realize wonderful photos and videos soon, named SMART SHOOT, intelligent enough for only you completed all without assistance.

Compromising on nothing, Smart Shoot bring you more benefits including shooting with smart phone, face recognition, intelligent tracking , free hand and super convenience for setup, comparing with traditional products while saving you tons of time and money!

For more information on the new Smart Shoot jump over to the Kickstarter website for details and to make a pledge from $88.