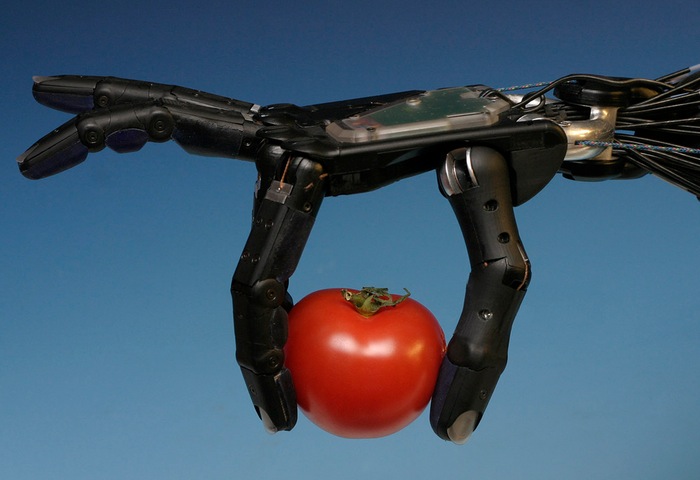 The Shadow Robot Company based in London has developed a new type of robotic hand that is equipped with both 3D cameras and sensors to enable it to “see and feel” objects and adjust its grip accordingly.

Using the 3D cameras and sensors the Shadow robotic hand named the Dexterous Hand, can analyse the shape of an object and then calculate the best way to hold it. Watch the video after the jump to learn more.

The Dexterous Hand is equipped with finger-tip mounted pressure sensors enabling it to understand the force it is applying to a grip and represents a “leap forward in artificial intelligence” says Shadow’s managing director Rich Walker who explains further:

“What we’ve tried to do is put intelligence into the robot hand, and that means sensing. So we’re adding sensors on the fingertips that can understand how the robot is touching the world and interacting with it. And we’re adding 3D cameras so the robot can see things around it and be able to work out how to grasp and manipulate them.

We’re exploring applications of the hand in areas where you’d really like to put a person but can’t. And that might be a search and rescue scenario where you send a robot in somewhere and now you want to lift something up, move something out of the way. Or equally, that might be working on a nuclear site where you have a hot cell where you can’t put a person in, but you really like human agility and dexterity there.”

The Shadow Dexterous Hand offers 20 actuated degrees of freedom and is now available to purchase for an undisclosed sum, jump over to the Shadow Robot Company for a quote and more information.