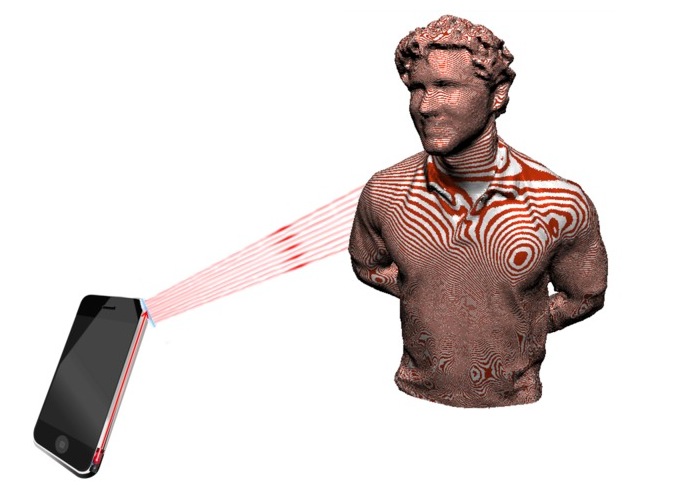 If you are looking for a reasonably priced 3D camera but already own a smartphone device you might be interested in a new gadget called LazeeEye that has been created to transform your smartphone into a 3D camera.

LazeeEye has been created to upgrade your smartphone for use as a 3D camera, using a laser illuminator hardware module and a stereo vision processing companion application.

“The enabling technology behind LazeeEye is active stereo vision, where (by analogy with human stereo vision) one “eye” is your existing smartphone camera and passively receives incoming light, while the other “eye” actively projects light outwards onto the scene, where it bounces back to the passive eye.

The projected light is patterned in a way that is known and pre-calibrated in the smartphone; after snapping a photo, the stereo vision software on the phone can cross-reference this image with its pre-calibrated reference image. After finding feature matches between the current and reference image, the algorithm essentially triangulates to compute an estimate of the depth.

It performs this operation for each pixel, ultimately yielding a high-resolution depth image that matches pixel-for-pixel with the standard 2D color image (equivalently, this can be considered a colored 3D point cloud). Note that LazeeEye also performs certain temporal modulation “magic” (the details of which we’re carefully guarding as a competitive advantage) that boosts the observed signal-to-noise ratio, allowing the projected pattern to appear much brighter against the background.

The name “LazeeEye” is a portmanteau of “laser” and “eye,” indicating that your phone’s camera (a single “eye”) is being augmented with a second, “laser eye” – thus bestowing depth perception via stereo vision, i.e., letting your smartphone camera see in 3D just like you can!”

The LazeeEye 3D camera smartphone module project is currently over on the Kickstarter crowd funding website looking to raise enough pledges to make the jump from concept to production and has already raised an impressive $214,000 with still 34 days to run, with a pledge target of $250,000.

So if you think LazeeEye 3D camera smartphone module is something you could benefit from, visit the Kickstarter website now to make a pledge and help the LazeeEye module become a reality.